What a Safari Trip

I just got back from the safari trip to Meru National Park. It was quite epic and I had a lot of fun. Although it was only two days, it felt much longer.

Recap on yesterday: I thought we were departing from Thiiri around 9am so I woke up around 7:30am and decided I didn’t have enough time to run, shower, and eat breakfast before we left. I was very wrong. I was the first from our team at breakfast and I had already packed and brought my stuff with me. Everyone else came and left to go back to their rooms to pack. I ended up sitting around and reading up on some news until mid-morning when the other safari trip came back and the locals arrived. I believe we ended up departing around 11am or so. It’s a little less than two hours’ drive to the Murera Springs Eco Lodge, where we were staying. It’s a really nice lodge about five minutes from the Meru National Park entrance. Everything—the lights, water, etc. is solar powered and there are individual “tents” for each room. The “doors” are made from a tent-like material and are opened with zippers. The overall “tent” is raised from the floor. It was actually a really nice place and I was very impressed. I think it’s equivalent to a four and half star hotel or something in America.

When we arrived, we had a short meeting about the plans for the next two days, which included taking a mini-hike for the day (yesterday) and scoping the area and then going on an early morning game drive and afternoon game drive for the next day (today). We were split into our room assignments and told to reconvene in about 15 minutes to eat lunch. I shared my tent room with Lillian and after we put down our stuff, we figured we had enough time to do a quick walk on our own before eating lunch. We walked down the path and then decided to walk past the stone path that was obviously marked off as a traditional walking path. To make a long story short, we walked past a stream, saw some fish ponds, met some of the locals at their home nearby, and asked if we could continue walking and circle around back to the Eco Lodge. We were told yes so we took a path we assumed would take us back to our original starting point. We were given poor directions because we must have walked 20 minutes without reaching our intended destination. We finally stopped and chose to head back in the direction we came from instead of continuing down the same path. On our way back, we saw a man with a machete. We figure, what’s the harm in asking for directions from a local again? It was apparently a lot. Lillian asked him to if he could direct us to the Eco Lodge in Swahilil and he started leading us so we started following. The next thing I know, we are passing another stream (probably the same stream), and into the forest. He starts hacking away at the plants in our path. It felt like we were in the movies where the scene is a forest and there is no real path made by humans. Everything was touching us, scratching at our skin, and we were the intruders in this place. I felt so itchy because I was wearing a short sleeve shirt and capris and all types of plants, and animals for that matter, were touching me at one point or another. I was behind the man with the machete and Lillian was walking behind me. After we walked in the forest for about 20 minutes and passed streams (literally the same stream) about four times, Lillian asked the man again if he was taking us to the Eco Lodge. At this point, it honestly felt like he was taking us farther away since there was no way we walked that far from the Eco Lodge at the beginning. That’s when we realized what happened. He sounded surprised because he thought we asked him to take us on a NATURE WALK. I have never wanted to facepalm, while laughing, so hard in my life. Lillian asked him to not take us back the way we came so we walked out of the forest and around the edge back to the fish pond and to the exact place where we first asked for directions and got lost. We backtracked and got back to the Eco Lodge but were an hour late for lunch. It was actually quite humorous when we were back. They had to make extra food since they were not aware we were missing and did not save us food. 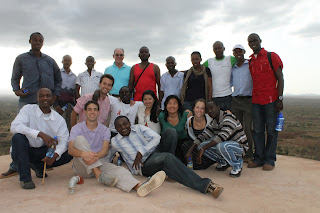 After we scarfed down our food, we took the vans out to this hill in what felt like the middle of nowhere. We hiked up and the view was gorgeous. When I first arrived in Kenya, I remarked that it did not resemble what I thought it would look like. However, this view was exactly what I first envisioned. The land went beyond my eyesight; the silhouette of the mountains gave an unreal backdrop; it was beautiful. We took tons of pictures and then walked around for a bit afterwards before heading back to the vans. We explored Mother Nature in all her glory. There were also homes randomly scattered around the land. Children were running around looking at us and they were so adorable. After some time outside, we took the vans to the entrance of the National Park and purchased our tickets for the next day (today) so we would be able to just drive into the park in the morning. While we were waiting for Bundy to get the tickets, I started learning some slang Swahili from Patrick. I asked him how to say “What’s up?” and once I had practiced enough, I walked up to Victor and said, “Niaje?” He started cracking up hysterically. Apparently the way I do it, the manner and facial expression in which I say it, is quite funny. I tried it on Luis and others too and everyone laughed. From that one phrase, I started learning more slang Swahili from Lillian and some of the others.

After we got our tickets, we headed back to the Eco Lodge and reconvened for dinner around the pool. It was quite dark in the area since the Eco Lodge is situated in the forest and has only so many lamps along the path to your tent cabin room. It’s definitely less light than I’m used to in America, and even at Thiiri but it was so cool because it was all solar powered and felt so much more natural. Nowadays, the world has so much light pollution that we can’t even see or appreciate the stars at night. Dinner was an awesome experience too. Since we were a large group, the lodge manager (Muse) invited the Meru Cultural Group to come and sing and dance for us. They were all wearing traditional headgear, clothing, etc. and pulled many of us in to dance with them. I felt like I got my exercise for the day just getting up and dancing with them for ten minutes. The food was really delicious too. There was even a barbeque of sorts with goat meat being cooked in front of us. It was just a really fun night with good food, good people to hold good conversations with, and mood setting with the lamps, little lighting, and dinner outside by the pool. My practice of slang Swahili with everyone made it quite humorous too. Honestly, I will miss the friends I have made here; they are really great.

After some time, people started going to bed and I did the same. I took a shower, chatted with Lillian while in bed, and then fell asleep. Unfortunately, we didn’t sleep very long because we had to get up around 5:20am to make our 5:45am breakfast and 6:30am sunrise game drive at the National Park.

Not everyone made it to today’s breakfast and we headed out quite early to try to make it to see sunrise. Apparently most of the animals come out at dawn and dusk because it is much cooler; during the day, most animals like to hide away from the sun in the shade. The goal was to see as many animals as possible before they hid for the rest of the day. My personal goal was to see a lion, or simba (which is Swahili for lion). Unfortunately, that goal was not realized today. We did however, see a lot of other animals: monkeys, baboons, ostriches, all sorts of deer-like-things, water buffalos, buffalos, fish, elephants, giraffes, rhinos, wart hogs, birds, etc. It was so cool to see them in the wild and I got tons of pictures. My favorite picture of the day however, came quite early. Bundy pointed out some monkeys in the trees so I started taking pictures. I got three shots in this order: a male monkey about to get on a female monkey, a male monkey actually on top of a female monkey, and the male monkey on another branch from the female monkey. It was hilarious. When the monkey saw us, he got off the female monkey. Out of all my pictures, that is still my favorite and I still laugh every time I look at that picture. 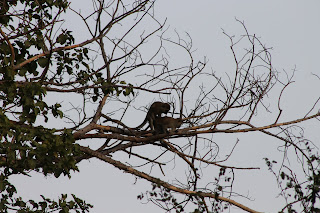 I didn’t realize how fast time flies by when on a game drive. We drove until noon and then left to go back for lunch at the Eco Lodge. Again, the food was delicious. After we ate, we had a short group meeting since our final presentation is on Thursday and we had some things to discuss. Then we had the option of going out on another game drive or staying and relaxing at the Eco Lodge. It was split about 50/50 of those who went and those who stayed. I definitely wanted to go on another game drive and hoped to see simba. Although we didn’t, I got some more good pictures of other animals. Around 5pm, we headed back to Eco Lodge and boarded up the vans and each van left one at a time as people were ready. Even though I was ready for a while, I left on the last van. My van got back to Thiiri around 8pm. I had a quick dinner and more importantly, an extremely refreshing shower. I didn’t realize how much sand was getting on me while on the drive. There was sand on my clothes, my hair, my face, my camera, my bag, etc. I guess it’s part of the experience. 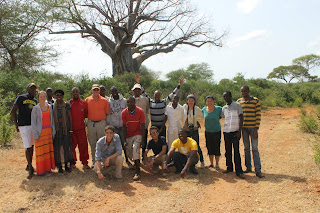