Today was a pretty cool day and pretty eventful actually. The original plan set the night before was to have a meeting with Jim around 1pm after lunch. We were to have the morning free to explore Thiiri a bit and have the morning to ourselves. I woke up around 6:30am and went on a quick run. It was a LOT harder than I originally imagined. Being at 5,000 feet above sea level makes breathing while running much more difficult than anticipated. I got a chance to run past Imenti and BLISS while on the road. Whenever I passed kids and waved, they would wave back but the adults looked a bit more stoic and stared a lot when I passed by. After I came back, the electricity went out around 7:45am. At breakfast, I was sitting at a table with Jim, Tomas, Afonso, and Thomas. Thomas is the group leader for the GIEU student group and told us that he was heading over to BLISS for Swahili lessons for his students around 8:30am with a BLISS teacher. We asked if we could join and he obliged. BLISS is a little less than mile away from Thiiri so the walk was not too bad; however, the road was extremely rocky as we walked a bit off the road (compared to my run).

BLISS is very nicely built (see photo). The facilities look really great. We got a chance to meet some of the GIEU students and join in on their Swahili lesson. A BLISS teacher taught us greetings and first person nouns. The lesson lasted about an hour and a half until 10:30am. After that, Layne, Afonso, Gwin, and I split from the GIEU students and had a mini-tour of BLISS led by another teacher. We saw the garden in the backyard where they grow carrots, onions, kale, lettuce, and tomatoes. It was interesting because they use drip irrigation for the plants in the dry season. We also saw the two pigs, cow, and rabbits they raise in the back. They dissect the rabbits in the science lab apparently. After the tour of the lab, where they house many materials (beakers, balances, etc.), we headed back to Thiiri. We ran into Jim on the road and got a chance to talk more about the plans for the day.

Although the day originally started out pretty windy, the sun started to beat down on us on the walk back. We had about 30 minutes to relax before lunch so a few of us sat in the back of Thiiri near the swimming pool under the shade. After lunch, we had our meeting with Jim and a bunch of guests. There were past BLISS students, some university students, etc. but they were all locals of Meru. Essentially, it was an introduction into our program and project. We introduced ourselves and got a chance to hear a little bit more about the new friends. After the introduction, there was an attempt to make the conversation a bit more casual and to let the relationships grow more organically. There were some really interesting people in the room with different backgrounds and interests. After some time, Jim and Rama announced the teams. My team consists of myself, Will (more of a helper), Alex, Julius, and Victor. Will is the other undergraduate from UM who is not a part of the MPowered team but is helping out with different aspects of this entire project. Alex is a 2011 graduate from BLISS who graduated first in his class. He is going to university next year. Julius is a 2007 graduate from BLISS who is interested in technology and computers and he runs the BLISS computer lab. Victor is in university right now but he also runs the computer lab at Thiiri. Together, our team is hopefully developing the Swahili language resource business. They believe it is a viable and good idea even though there are some definite issues that must be ironed out. We ended up talking with our teams until about 6pm or so. I actually got a chance to bond pretty well with Alex and Julius as our conversation became a lot more organic and flowed from business to interests. In addition to the huge chunk of time that we spent with our teams today, we invited them to watch the Eurocup soccer match with us later that night. The hope was to go to a local bar in Meru and watch the England-France game.

Since the electricity was still out at 6:30pm and dinner was still being cooked, a soccer or “football” game started to get underway. As a poor soccer play, I stood and cheered as a spectator but it started getting quite dark so I couldn’t even follow the ball, to be honest. When dinner started around 7pm, there was still no electricity so we were running by candlelight and flashlights. It wasn’t until halfway through dinner that the lights came back on. Apparently, electricity is usually shut on Mondays to conserve electricity for the rest of the weeks. After dinner, two vans of us left to go watch the rest of the game at the bar about 5-10 minutes away. A bunch of our new Kenyan friends joined us so it was night to see them and develop the relationships in a more organic manner. We headed back some time after the Ukraine-Sweden game started. 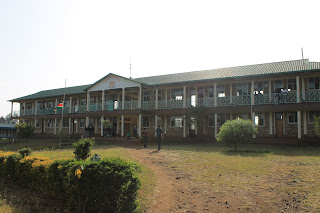