My Days Are Numbered

When I woke up this morning, I still felt tired from the safari trip. Even though I wasn’t super active from the game drives, I still felt exhausted. I couldn’t even get up to go on a run. Part of the problem was also that some of us were leaving Thiiri at 7:45am to go to a Primary School’s morning ceremony at 8am. This specific Primary School was also down the street but it didn’t have any running water or electricity. In fact, they just upgraded their facilities and got glass for their windows. This was a school I haven’t been to yet. So apparently, at every school, they have a ceremony of sorts every morning where the head master, or principal, gives a few inspiring remarks or announcements to get the students ready for the day. When I asked Rama about the effectiveness of doing such a ceremony on a daily basis, he said it works because no kid wants to be late for that ceremony. If you do, you honestly have to stand aside from the rest of the group and be dismissed after everyone else.

When we got to the school, they were in the middle of the ceremony but the headmaster greeted us and announced our arrival to the students. Dan has been working with this school for a while so we were pretty welcomed. He also brought a bunch of materials for the kids such as markers, crayons, construction paper, pipe cleaners, stickers, etc. After the kids were dismissed, Gwin and I went into Grade 1’s class to play with them for a bit. We gave them construction paper, markers, crayons, and stickers. Unfortunately, they were just beginning their English education so they only knew a few basic words. The teacher did a lot of translation for us. The kids were still so incredibly cute though. And some of those kids can really draw. I saw drawings of cats, cows, mangoes, cars, and even a helicopter. 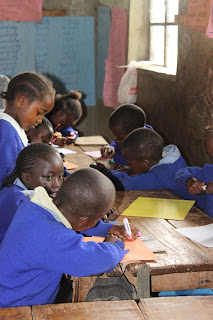 Around 9am, Gwin said she had to leave to make her group meeting at 10am so I walked her back. I wanted to go back to the school and play with the kids at recess though since I didn’t have any plans until my group meeting at 2pm. Luckily, Jacob was there and told me he would drop me off. I went back to the school and pretty much just played with the kids at recess. Those kids love holding onto your hand and arms though. I have never had so many children touch, grab, and pull on every part of my arm for attention. Once they hold on, they don’t let go either. When I used a wet wipe later, you could actually see all the dirt that came off my hands and arms.

I went back to Thiiri in time for lunch and then did some research and work on my own until my team arrived around 2pm. Phineas took Gwin and Tomas’ team and my team to the town market, the waterfall, and the big tree. These were all random “attractions” that I wanted to hit up and see before I left Meru. Since we’re presenting tomorrow and leaving Friday afternoon, I figured today was the last real available day to really go and see these things. The market was a cool experience. There are street vendors as far as the eye can see in every direction. There are kids walking around rolling wheelbarrows following people who are buying a lot of things and need help carrying stuff, working just to get a small tip. There are all types of foods and products being sold. I felt like if I need anything, I could probably find it in the market. The waterfall was a normal waterfall. The big tree was actually pretty cool. At first, I was skeptical because I’ve seen some pretty big trees before and to call something a “big tree,” it better live up to its name. It did. It went up extremely high and had a huge base. The interesting thing was that it was completely hollow inside, from the base all the way up. We fit about 10 people in there at once; it was insane and pretty cool.

After the trip, my team started talking about our project and business ideas. We got a good basic understanding of our presentation tomorrow and walked through some of the questions. We were pretty efficient, finishing up in about an hour with the finalization of the ideas. After my team left and I ate dinner, I started typing up our business plans in the computer lab. Victor put on some music for me to jam to while working but I didn’t finish the Swahili Online Tutoring Business Plan until about 11pm. I think I went pretty in-depth but the hope is that the presentation goes well tomorrow. Our team is aiming to meet around 8am so the lack of sleep should be interesting.