Would Taking an Kenyan Child Home Be Considered Checked Luggage?

Today was a child-filled day. Per usual, I woke up around 7am and went on a run. It took a lot more effort to run today even though I slept at 9:30pm last night (yes I am aware I slept almost 10 hours). The way I figure it though is if I choose not to run one day, it will be much easier for me to choose not to run the following day, and the day after; it turns into a snowball effect of laziness. I also didn’t realize yesterday but the back of my neck is a bit sunburned. It feels a bit tender so the sun must have been beating down on it during yesterday’s hike. Today’s run was special though—some kids who were on the road walking to class saw me and started running alongside me. They only ran about 30 seconds with me but it was adorable nonetheless. After showering and eating breakfast, I walked to BLISS with Thomas and Chuck, the two GIEU leaders. When I got there, I found out that today was not a traditional Swahili learning day but the GIEU students were teaching in the classrooms since they are leaving Meru tomorrow. I saw Moses, the BLISS headmaster, said hello and asked if I could attend a class. He led me to a Form 1 class (9th grade equivalent), where I got to sit in and listen to the agriculture lesson. I drew attention from each student from the offset. Every pair of eyes was on me and it didn’t stop when I sat down at a desk in the back. I listened to the teachers and observed the students. I realize that kids are the same everywhere, it doesn’t matter if they live in the US or Kenya or China. Younger kids have not been completely conditioned in their environment yet so I feel like they all act the same and share the same innocence. Watching the classroom, there were students sleeping with their heads down, students whispering while the teacher was talking, students passing notes, students paying attention, students playing with random objects, etc. I feel like I would see the same thing if I went into a US 9th grade classroom and I expect to see the same if I teach 9th grade English in Korea. The kid behind me was a bit annoying though. He kept blowing at my hair. I’m not sure if he was trying to get my attention, or thought my hair was interesting, but he would not stop. I finally turned around, looked him straight in the eye and asked, “Can I help you?” He replied that he did not so I said, “Okay. Stop blowing.” I don’t think he expected me to be so direct so it was kind of funny. When I turned back around in my seat, everyone was looking at me. Since they don’t see foreigners on a daily basis, I assume they find me intriguing.

After extensive agriculture learning, I headed over to one of the primary school next door. BLISS has two primary schools next door, one is part-boarding school, part-public school and the other one is strictly a public school. I got a chance to see both the schools. I got to take tons of pictures of the kids while they were at recess playing. 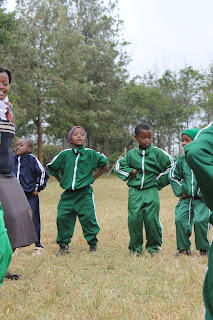 There was one class that the teacher said, “Today, we are going to learn how to do a front flip.” My jaw dropped. She wasn’t kidding. She went onto demonstrating and showing the kids how to do it. The way these kids picked it up though makes me think that they’ve been able to do these flips since they’ve been walking. Honestly, the kids LOVE having their pictures taken. There were kids tugging on my shirt asking me to take their picture. They wanted to touch my camera, they wanted to get their pictures taken, etc. To be honest, I find myself in an ethical debate. Is it ethical to take pictures of these kids? If some stranger from another country came to the United States, went to an elementary of middle school, asked if he/she could take pictures, and then took photos of the students playing, I would think that person was a pedophile or a creep. If I had a child, I would not want that person near my child, I would not want that person to take a picture of my child or take a picture with my child. Yet, somehow, we Americans find it acceptable to go to Africa and take pictures of African children that we do not know? Even though we get the “okay,” is it actually fine to do that? In reality, when I go back home, will I remember every child’s name that I took a picture of? No, I won’t. And even if I knew their names, what makes me think it’s okay to know these kids for 2 weeks and then feel close enough with them to take their pictures? It’s something I think about every time I play with these kids. This is something I thought about when I was in Ghana too. At the end of the day though, I took their pictures and I’m not really ashamed of it because they wanted their pictures taken. They even asked to have their pictures taken. Yes, I don’t remember all their names but they don’t care. They are carefree children. They know we find them absolutely adorable. 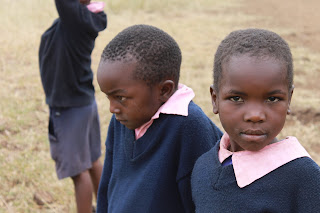 After many pictures, I began walking back to Thiiri since it was getting close to noon, also known as lunch time. Just as I passed BLISS, I saw Jim in a van so I hopped in to avoid walking back. While waiting for the food to get ready, I passed by some of the kitchen staff. Since I tend to err on the friendly side, I greeted them and engaged in conversation. They were peeling potatoes so I asked if I could join. It was pretty awesome because I got to know the kitchen staff and I helped prepare food for dinner. I had some good conversations and felt at ease with them. They even gave me a new name, Ntinte, in the local language. Translated, it means “good person,” which I think is pretty awesome. After lunch, I met with Jim and Kevin, a local from town who is here for the weekend and is pretty knowledgeable about businesses in Kenya; it was a status update and they provided some feedback. Then I got a chance to go into the kitchen and hang out with the kitchen staff some more. They taught me how to make chipatti, a Kenyan food (kind of like flat bread). It’s flour, sugar, water, and oil. It’s kind of like a fried pancake that is rolled up; it’s pretty good. The staff is really friendly and fun to just joke around with.

Sometime later in the afternoon, there were a bunch of kids who showed up at BLISS. There had to be at least 200 of them. They were all pre-primary kids with their ages ranging from three to five. They were so cute. They also loved having their pictures taken and running around with us. They tugged on my shirt a lot and loved stroking my hair, pulling on my skin, etc. I didn’t mind it too much but I felt like I was being mobbed by 50 kids at once. It was crazy. 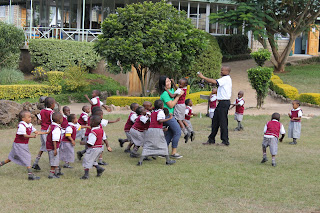 After it calmed down, I got to hang out a bit before dinner. Our group meeting was cancelled to give everyone some time to relax after yesterday’s hike. I played a bit of table tennis, talked with some of the med students, and just relaxed. Dinner was a bit hectic as there were about 100 people being served. Since it was the GIEU students’ last night, they and their host families came for a special last-night dinner at Thiiri. It seemed like the GIEU students really had a great time with homestays and built some awesome community ties. After dinner, Afonso, Tomas, Gwin, Will, and I went to go watch the Eurocup match and then headed back to Thiiri for the night.

Kids really are awesome to hang out around. They have little worries, they dream big, they love life. I think the more we grow up, the more we lose focus on the important things like family, friends, food, and a good time. Kids have the answer to life. We just lose sight of it as we get older and start paying attention to different things.