Since Kenya is primarily a Christian nation with a few churches on every block, most people attend church on Sundays. Although not everyone on our team is a Christian, we attended a Methodist service to experience a part of Kenyan culture. Even though I knew we weren’t leaving for the service until 9:10am, I woke up at 7am and went on a run. Since today is a Sunday though, I only saw about two cars total while on my run, as compared to ten or so cars on a normal weekday. The service was interesting and the church we decided to attend is one that Marilyn (who runs the Thiiri Center), Moses (headmaster at BLISS), and a few others we work with like Emmanuel and Luis, attend. Today, Marilyn was actually the speaker. I noticed that the service consisted mostly of worship songs and we were constantly standing up to sing or follow the choir in a hymn. It was definitely a unique experience.

After our service, we went back to Thiiri and ate lunch. Around noon, Phineas (our Genesis tour guide who remained with us while the others went on the safari) picked us up and took us to Nakumatt and then to IPI. The latter is where a bulk of our time went. Layne brought some of the soccer balls to Amani for the kids to play with. When we got there, they were just finishing lunch so they were ready to play. We spent the next four hours at Amani playing soccer, throwing a football, etc. The kids were absolutely adorable. One kid, Kevin, came up to me and said he recognized me. He attends Kithoka Primary School and was at recess two days ago when I went to visit. I thought it was pretty cool that he remembered me. After playing, Dr. K invited us to have some tea and then we planted the Peace Tree for her. It’s a painted tree with “Peace on Earth” engraved on it and “Peace begins with me” in different languages painted all over it. It’s pretty cool and we got the opportunity to finally plant it for her. 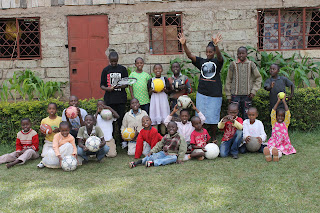 We left around 5pm to head back to Thiiri and relax for a bit. When we came into the Thiiri lot, I noticed there were at least 20 or so cars parked. There were people everywhere—on the lawns, in the pool, in the dining room, on the balcony, etc. Apparently the Thiiri Center gets used frequently on the weekends, which makes sense. The UM dental students also had arrived and were in the dining room. They got into Nairobi last night, came into Meru today, and are staying at IPI with the medical and pharmacy students. Like us, they are here for two weeks but are doing similar projects to the medical and pharmacy students (health surveys).

I wandered around Thiiri for a bit, sat on the swings, chatted with Gwin and then we saw Phineas sitting in his van near the front. We asked him what he was up to and he said he wanted to go somewhere for a bit and come back. He was going to “junction” to see people. We ended up jumping in the van with him since we had time to kill before dinner and wanted to see a bit of Meru from a local perspective. We got to chat with him in the car about some cultural things like perceptions, customs, Meru traditions, dating, etc. Around 7pm, he drove us back to Thiiri just in time for the start of dinner. I sat with three of the dental students and got to know them a bit. Some of the things they talked about regarding teeth were so intriguing and kind of scary; it definitely makes me want to take care of my teeth.

Around 9:15pm, we headed out to a bar/karaoke place to watch the Eurocup. It’s a different place than the hotel we have been going to. Bundy (the director for Genesis and the head honcho driver) joined us and then told us he would take us to another place during halftime that had two televisions that showed the Portugal and Germany game. When we went to it, we figured out it was actually a “Members Club.” On the back of the chairs, it read “Kinoku S Club.” I assume it’s a gentlemen’s club or something of that sort since there were no girls around, except for us and there were a bunch of soccer posters and random “manly” stuff. It was actually pretty cool.

Today was probably my favorite or one of my favorites so far because of the time I got to spend with the kids playing around. It was just so relaxing and fun.