I gave my cell phone to one of my team members, Luis, last night since he is in the business of fixing phones; my 3gs IPhone has a cracked screen from when I dropped it a few weeks prior. I didn’t realize it at the time but I use my cell phone as my alarm so when I was going to bed last night, I freaked out because I have no other way of waking up. Since we were hiking Mount Kenya today and were leaving at 7am, I had to wake up even earlier than usual. And the fact that we went out the night before meant I was sleeping even later. So essentially, I ended up sleep very little and very lightly so I could wake up a few times during the night to check the time to make sure I wasn’t late. When I woke up and the time was 5:45am, I decided to just stay awake since I knew there would be no way I could reawaken myself in half an hour. By the time I got to the dining room at 6:30am, I realized I was the first one there. We didn’t even end up leaving until 7:30am or so since we were still waiting on others. What an epic fail. 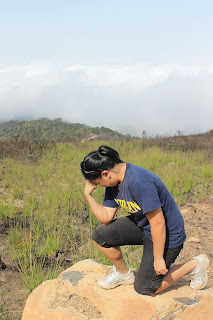 The drive to Mount Kenya was about an hour. Emmanual, one of the BLISS graduates was sitting next to me on the van so I had an interesting conversation with him. He asked some unique questions and made some comments that I didn’t know how to respond. His questions were mostly regarding American perceptions and culture. He asked if we (Americans) expected Kenyans to ask us for money; why we ignore friendly strangers when they say hi; if anyone could get into university in America; etc. He then went on to talk about our group specifically and talked about his situation. He graduated from BLISS and tested well enough to go to university but was trying to fundraise money to attend. However, his peers that did not test well enough to attend university were saying things to the extent that our group was giving him money and sponsorships to attend university; they were accusing him of fundraising money to just pocket. He also said that he and the rest of the locals we are working with are very lucky since they have the opportunity to join us in our adventures. Our group is paying for their safari trip on Monday and has been dishing out for other random occasions too; for example, the trip to Mount Kenya was free and at the bar last night, there were 2 drinks on the house, etc. I wasn’t quite sure how to respond or feel, to be honest. That’s something I need to sleep on. 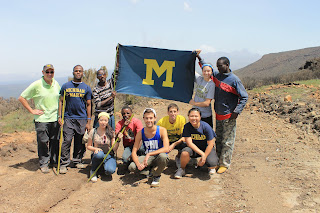 We drove up the side of the mountain, instead of using the typical entrance to avoid potential political demonstrations that would have blocked the road. The three vans drove up about an hour into the slopes and it was supposed to go up even further but the soil and lack of grip caused the vans to stop about 9 kilometers short of the supposed drop off point. One van couldn’t drive up a certain hill so everyone packed into two vans to get further until those two vans were also stopped by the landscape. So we got off and started walking. We had about 3 tour guides with us who live in the town near the mountain and climb the mountain on a daily basis. I was talking to the main tour guide guy and he said he’s been hiking the mountain for the past 59 years. He’s got to be well into his 60’s or 70’s but he’s in awesome shape, which makes sense for someone who hikes up miles of mountain every day. Everyone was going at a different speed so there were clumps of people who were walking up together. I started out pretty fast initially but slowed down as we got deeper into the slopes. We hiked for about two hours and stopped for lunch. Because we had to start our hike earlier than expected, we stopped shorter than expected too. We were at the same altitude as the clouds. It was a breath taking view regardless. Initially, we were trying to reach the bottom of Mount Kenya since we were only hiking on the slopes of the mountain. There was a lake nearby too. However, by the time we finished lunch around 1pm, we found out that it was another 1.5 hours trip to the lake. That means it would take 3 hours roundtrip to get to our lunch location. From there, it was another 2 hours to return to the vans and another hour to get out of the forest/mountain slopes and onto a road. We wouldn’t get onto the road until 6pm and since sunset is at 6:30pm, we would be cutting it extremely close. It is dangerous to be in the forest or mountain any time after dark so we decided against continuing further. We walked back to the van and then drove back to Meru. Everyone and anyone we passed stopped and stared at us. I’m not exaggerating. Every pair of eyes were on us as we drove through the town closest to the mountain. 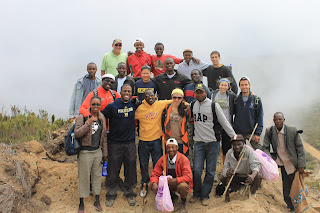 It is fair to say I got a good share of exercise today, to say the least. It had to be at least a few miles of hiking up and down the mountain. When we got back, I ate a quick dinner and took a glorious shower. I think everyone is feeling tired so we all holed up in our rooms after dinner, even though it’s relatively early. I guess this is how elderly people feel—early to rise, early to rest.