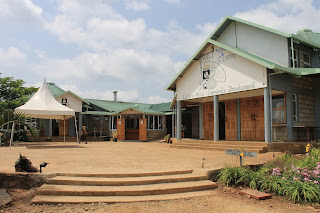 The overall flight time was about 18 hours. I travelled from Miami to Atlanta to Amsterdam to Nairobi. I think the flight from Atlanta to Amsterdam was the hardest for some reason. I like to sit in aisle seats because I like to get up often and walk around the plane but I switched seats into a middle seat because the couple next to me wanted their daughter to sit next to them.

We touched down in Nairobi around 8:30pm. Kenya is 7 hours ahead of EST. There were about 15 of us on the plane, some Medical school students, some Pharmacy students, an Undergraduate, some faculty, and the MPowered students (that’s us). We went to a hotel of sorts about 25 minutes away from the airport for the night. They had nice accommodations—clean and friendly. The air isn’t has hot and humid as I thought it would be. Other people thought it was pretty humid but compared to South Florida, the humidity is not worse at all. There’s a bit of wind so it’s actually pretty nice weather. I woke up a few times during the night but that would be expected with the time change.
\
After breakfast and a short debrief with group leader Dan Clauw, who apparently is a pretty big deal, we headed out. The debriefing covered some… interesting topics. We were advised again on our dress attire, which was sleeves and below knees, told not to take pictures of people without their permission, which is a big deal, etc. The interesting portion came when Dan covered sexuality. His end statement was, “Don’t do it.” Apparently, there was an incident last year in which a student had a sexual relationship with a Kenyan. It at least broke the ice. We left around 9am in four vans. Three vans had people in them, and the other had our luggage. Our driver was Jacob. Our destination was Meru (pronounced May-ru), which was about four hours away, heading Northeast from Nairobi. We were supposed to have three stops: the first at a Curio souvenir shop (which we considered more as a bathroom break), the second at Sweetwater (where we would eat lunch), and the third at another bathroom stop. We were told that we could buy souvenirs later on during our visit since this first visit would be extremely overpriced as the locals would see us as tourists who had money.

The stop at Sweetwater was really nice. I could tell that it was more of a tourist location though. The food was delicious and it’s located on a Conservatory so there were a bunch of animals roaming around. It’s about 110,000 acres of land. We were supposed to leave after lunch but instead, we got to go on a short tour around the land. We saw some antelope, wart hogs, a water buffalo, elephants, and rhinos. They also have a blind rhino, which they keep in the rhino sanctuary so we got a chance to get up and personal with him. I got to feed him and pet him. It was pretty awesome. We also got to see the equator “line”. Though it’s hard to measure exactly where the equator is, we know it’s around the area. Then we finally left our mini safari ride to head out. We got to Meru around 8pm—much later than anticipated. The MPowered group, the Undergrad, and the faculty are staying at the Thiiri Community Center and Medical and Pharmacy students are staying at the Imenti orphanage. To be honest, I wanted to stay at the orphanage so I could play with the kids but the Thiiri center is pretty amazing too. The grounds are really well kept and the people are extremely nice.

Right now, I’m sitting outside enjoying the really nice weather (a bit of wind, about 60 degree weather) and had some random thoughts and observations. Nairobi is a lot more developed than I imagined. The buildings look good and there really seems to be a lot of commerce that happens in the city. Once, you move out of the city however, it becomes a bit more like I envisioned when I first thought of what Kenya would be like. The dirt here is very orange-red because there’s a lot of iron in the soil. It’s hard to find a trashcan around. Most people burn their trash so I’ve smelled that a few times on the drive. We passed by the slums, and I can see there are a LOT of people who live in poverty here. About 50% of the population is unemployed. And to think of it, that’s what we’re here to hopefully solve and change. When we stopped to take some pictures of the city of Nairobi, I asked Jacob what he loved most about Kenya. When I was in Grenada, I remember asking our driver, Foxy, that same question and he said it was freedom that he enjoyed: the fact that you could do whatever you wanted whenever you wanted and no one would bother you. Jacob on the other hand took some time to think about it. He responded with the fact that Kenya is still developing and getting better. Since the new Constitution, there have been a lot of good changes but Kenya is bad. Then he added that there are cool animals to look at. It was interesting to get his perspective because he was born and raised in Kenya. I found it a bit odd that he couldn’t respond with one thing he loved most about his country.

Kenya is very different than what I first imagined. The weather is much nicer and the landscape is very mountainous. We’re at a high altitude here. The people are very friendly and inviting, at least those that I have met thus far. The accommodations are really impressive too. We're staying at the Thiiri community center (see photo). I honestly don’t feel like I’m living extremely out of my comfort zone as there is running warm water, working toilets, a bed with a mosquito net, good food, etc. It’s not bad but I definitely feel like I’m being treated extremely well… like a high paying tourist. I’m not saying it’s bad to be treated well but it just definitely feels a bit too comfortable.

I’m also worried about the work my team and I will be doing. The hope is that we’ll really be able to see a need for the community here and be able to provide a real business proposal for help. Timing is a factor as well as resources. Tomorrow is our third day, or second full day, but the agenda is unclear. Our meeting with Jim and Moses will be in the afternoon so we have the opportunity to get a bit adjusted in the morning. I think it’s good to get acquainted with the area but I find that I’m a person who likes to jump right in. I think I need to push real hard because I really do want to make an impact here.