I am done. I think I'm at the burn out period. I am a little less than a month away from break and I have been teaching for three months. These kids and their actions are taking a toll on me. There hasn't been a single event that has caused me to feel this way. It's just more of a buildup that has occurred. I realized it didn't take me long to adjust. I didn't stop to really figure out how I was dealing with everything. It's catching up to me now, and hitting me like a brick. I can't really explain how I'm feeling, but I'm going through a trough for sure.

I don't feel like I'm teaching these kids anything. I'll teach them someone one class and they forget it by the next class. Even worse, I'll teach something one period and they won't listen or pay attention and they will ask questions about what I taught them that same period. Examples: I told them they cannot start sentences with conjunctions (and, but, because, or) one day. The next class, people were at the board and were starting their sentences with "Because...". I turned to the class and asked what I taught them last class. No one responded. I asked them if they could start sentences with "And, But, Because, Or" and they all said yes. UGH. Another example: I taught them a lesson on Thanksgiving and then had them make turkey hands. While I was walking around, I saw a student turn to her neighbor and ask (in Korean), what Thanksgiving was. DOUBLE UGH. I even have an example from today. I taught a lesson on giving compliments. During the activity, a student wasn't writing a compliment (comic compliments) so I pointed to the paper and told him to write a compliment. He turned to his neighbor and asked what a compliment was. I wanted to just die right there. It's frustrating because I'm not teaching them complex things, just trying to improve their current abilities. They know what conjunctions and compliments are. This is all just frustrating.

It doesn't help that I taught at Andrew Moncada's school this past Saturday. His school had a Saturday English camp and he needed 3 more teachers so Katelyn, Tracey, and I taught alongside him. We rotated through four classes. He teaches at an all-boys high school in Iksan. His kids were ANGELS. It was so nice to have students pay attention, listen to directions, and pretty much grasp what I'm trying to say or convey to them. It was so nice and such a sharp contrast to my kids. In a way, I really wish I had decided to put down high school as a preference when I was filling out my preference sheet (although I probably wouldn't have gotten it since I didn't get anything else either) but still. Teaching middle school is really hard. I'm realizing it now. I get there are pros and cons to each and a lot of students sleep in high school and have no energy, but the tradeoffs seem really enticing right now. My kids are just taking their toll on me.

Onto an update of Korea adventures...

Two weeks ago, I tried 홍어, which is skatefish that ferments in its own pee. Tracey's school was having a celebration dinner for the teachers because school rankings came out and her high school is ranked first in our province, Jeollanamdo, and ranked third in all of Korea. It's quite a feat. All the high school teachers went out for a dinner, paid for by the school. Even though I'm at the middle school, I was invited and allowed to go because the Principal likes me, apparently. It doesn't taste like a lot at first but after a long time spent chewing, the ammonia hits your nose. It's not pleasant but it's something I wanted to do before I leave Korea.

That weekend of November 16th, I went to Seoul and met up with almost all of the ETAs. Tracey and I went into Seoul a little later on Friday because there was a radio show that was recording her students that Friday. I went to see it in her school library after my classes and the kids were really impressive. One of her students, Jean, did a rap and he was REALLY good. I actually played basketball with him one time and he's really into rap. His English was really good and I was impressed. Anyway, after the radio show recording, we left for Seoul. The KAEC office was hosting an ETA Thanksgiving dinner for all of us on Saturday night. It was really nice of them. The food was good but I think I set myself up for failure because I was looking forward to green bean casserole and mac and cheese. Those are my two favorite things from a Thanksgiving meal and both were missing from the dinner, unfortunately. There was turkey, ham, stuffing, mashed potatoes, gravy, and cranberry sauce though. Overall, I shouldn't complain because it was a very nice dinner and it was great of the Fulbright office to do it for us. The Ambassador was present and so were other Embassy officials.

After the dinner at the National Folk Museum, a bunch of us headed over to the Cheonggyecheon Stream for the Seoul Lantern Festival. It reminded me of the Jinju Lantern Festival but not as extravagant or large.

The week after coming back from Seoul (last week) was when I started feeling a bit dissatisfied being here. I'm not sure if it was because I was so tired. I went out both Friday and Saturday night in Seoul. On Friday night, we didn't get back to the hostel until 4am and on Saturday night, I got back around 2am. On the other hand, I'm just feeling like the kids don't want to be here. It's a bit of everything. Regardless, I did a lesson on Thanksgiving for my students. I do want to hit upon one story: I was putting up turkey hands that students had made in some of the classroom I teach in before lunch. After lunch (about an hour later), I walked by the classroom and saw that all the drawings were torn down. During lunch, students (usually the boys) will invade a classroom and use the computer to play games and watch videos. So, when I went into the classroom, a bunch of students were still around on the computer and messing around. I asked who tore my drawings down. The students were all looking at me and not saying anything. There were some kids pointing at a kid (I think just to pick on him) but I was not having it. I just walked away. I went back to my desk pretty disappointed. I had spent time putting up the drawings. About ten minutes later, two of my students came to my room and had a bunch of the drawings in their hands. They had gone through the trash to collect them. I was still angry with them so I told them I didn't want them but I wanted them to go back up on the wall. I handed them my stapler and off they went. About five minutes later, they came back. I went into the room and it was chaotic. They had just stapled the drawings around the back wall randomly, everywhere, in every direction. There were about three of my boy students putting them up. I looked at them and shook my head. I told them I wanted them next to one another, in an organized fashion. I was standing at the front of the room watching them and it was actually pretty funny. One of the students ripped a part of the paper but then immediately covered it up with his hand. I found it so funny. He didn't mean to rip the paper but once he realized he did, it was very obvious he wished he had not done so. I actually started laughing and told him it was okay. It actually cheered me up some, the fact that they put the pictures back up. There is some hope that the kids care.

This weekend, I went to Iksan with Tracey late on Friday night for Andrew's camp (as mentioned earlier). After we finished the camp at 3pm, the four of us went to downtown Iksan where Andrew and Katelyn showed us around. We went to CGV and watched the last Twilight movie. I haven't read the books and have only seen the first Twilight (Freshman year of college with Aubrey and the twins because Aubrey really wanted to go see it) so I wasn't too sure about it but I ended up actually really liking it, surprisingly. I know the Twilight series are really lovely dovey and crap, which I was not looking forward to (since the first movie was like that) but the last one was actually pretty entertaining (the ending at least). The beginning was kinda too much stupid love/stuff-that-would-not-happen-in-real-life but the movie got really good at the end. There's this huge, epic battlescene with people ripping other peoples' heads off and the four of us were pretty much screaming in the theater. We were so loud, screaming, "OOHHHHHHH" and "AHHHHHH" every 10 seconds but it was HILARIOUS and absolutely RIDICULOUS. I won't say much more about it but the movie exceeded my expectations (though to be fair, I didn't really have any to begin with). I enjoyed myself. After the movie, we went to the arcade where there is this one awesome game. Andrew and Katelyn said the game was a rite of passage for all those who visit Iksan. It was a lot of fun; it's a video arcade Korean version game of Super Mario Party, if that makes sense.

Oh and one last thing. When I got back from Iksan on Saturday night, there was a puppy in my host family's apartment! My homestay got a dog finally and she's adorable. She's tiny and only 5 months old right now. Her name is 까비. 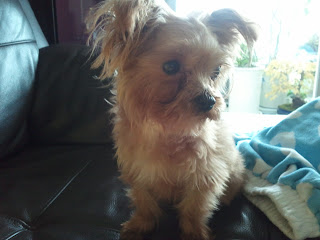