Last weekend, I went to Daegu with Tracey for Taylor and Cameron's Surprise Birthday Party. It was going to be an weekend event, of sorts, which launched with a Surprise dinner at TGI Friday's at 9pm. Tracey and I weren't really lucky with tickets. We left school around 3pm (after our classes) but next available ticket to Gwangju wasn't until a bit after 4pm. When we got to Gwangju, we couldn't get a bus to Daegu until about 7pm and it's about a three and a half hour drive so we knew we wouldn't make it. Regardless, we could participate in the after dinner festivities and we wanted to see Cameron and wish him a happy birthday. It was nice to see so many other ETAs around too and I could tell that Cameron was touched we traveled so far to celebrate with him. 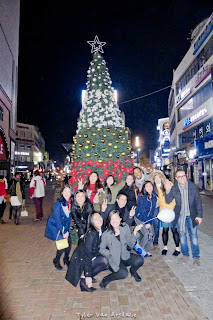 The hostel we stayed at was right in the downtown area where we hung out all weekend so it was really nice. We went to Club Egg after TGIF's and at first, they said they didn't let foreigners in. We were appalled, especially the Daegu crew because they have go pretty often. Apparently they said that foreigners have too much fun. No lie. Then some people stayed to talk with them and they let us in but some of us weren't happy about it; why would we go in your business, purchase drink, and support you, when you told us we couldn't go in? Well, the girls got in for free so I was fine with it. The boys had to pay 20,000won cover though. It was actually a pretty fun night and I didn't get back to the hostel until around 3:30am. 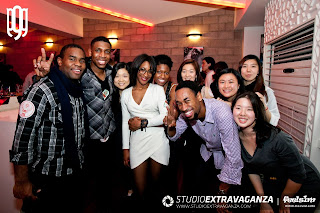 On Saturday morning, I got up around 9am (I can never sleep for long periods of time in a hostel) and headed out with Tracey and Sara J to meet Cameron at the center of downtown (some stage). Then Jayeon, Stephanie, and Jessica met up with us and we all got lunch together at a sandwich place. Jayeon, Stephanie, and Jessica had to leave during our meal to catch their bus back but Cameron, Tracey, Sara, and I hung out all day together. We took photobooth pictures together, shopped around, walked about, etc. It was actually really nice. We went to the herb street and stopped by the museum too. There was a handson part of the museum where we did some tai chi and put on hanboks and stuff too. It was actually a pretty entertaining day. 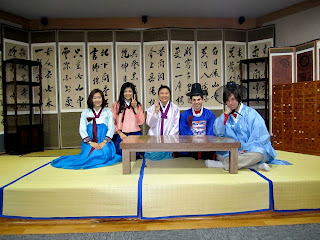 Thomas joined us at the museum and then we met up with Jonathan, Adam, and Soon at Coldstones. Adam and Soon left after 5 minutes but it was nice to see them. Then we went out for Korean BBQ dinner, followed by a trip to the bar and then to the club, Old School. There are a few things to note about the bar and Old School. The bar we went to, Thursday Night, was RACHED. Long story short, there was this pair, a Korean chick, and an Indian guy going at it in public. It was disturbing and gross. Of course Jet and Thomas had to be very obvious about it and were taking pictures with flash on and such. Old School itself was an experience too. It was really ghetto when we went before military curfew at 2am (as defined by Cameron and Jet).
On Sunday, Tracey and I met up with Ashley to go to Costco. I picked up some popcorn (I'm gonna show a movie and give popcorn to my good classes for the last week) for my kids and Tracey got some hot cocoa and peppermint candy canes for her kids. Then we headed back to Mokpo. It was actually the earliest we've ever left a city to go back to Mokpo on a Sunday (we left around 2pm). My overall impression of Daegu was really positive. There are parts of downtown that kind of remind me of Minneapolis. The sidewalks and stores were really cute and reminded me of Nicollet Mall and random other places when I was working there.

So this week has been really relaxed because I've been playing a bomb game with both my second years and third years. I'm doing an English review game for my second years as their finals are next Monday and Tuesday. My third years have been done with finals for two weeks now and they're ready to leave middle school/not learn anything new, so I'm doing a fun bomb game for them. There's a lot of random questions about me, America, and things they've learned in the class in there. They seem to be enjoying it. It's a bit sad to think that my classes are finishing up. It really has flown by and I wonder if any of my kids have learned anything. The good thing is I'm past my burnout mode. I think I was just having an off week. I mean, I'm still struggling with thinking I'm not teaching anything to anyone but I feel a lot better overall.

Today, after my classes, at 3pm, there is a sports day for the teachers. All the middle school teachers and high school teachers are getting together in the gym and competing on two teams. There's volleyball, kickball, tug-of-war, and a three-legged race. I'm on the tug-of-war team (they signed me up) and Tracey's doing volleyball (duh since she played in college). It's supposed to be three hours. Afterwards, all the teachers will eat dinner together in the cafeteria. It should be fun and 정 building.

Tomorrow morning (at like 6am), I'm heading to Busan for Kathy's birthday. She wanted to spend time with people and she picked Busan so I'll be heading over there to spend the day with her. I still can't believe break is coming up soon. My time in Korea has flown by. Wow.
Posted by Ammy at 8:41 PM