Last Thursday was the 수능, which is the college entrance exam. I had no school Thursday and it was half a day on Wednesday because the teachers had to go to a meeting to prepare for proctoring the next day. The 수능 is a HUGE deal in Korea. It's really a national event, really. No planes are allowed to fly that day (seriously). There are police roadblocks set up around schools sometimes to stop noise and work on traffic flow so no student is late to it. It's a BIG deal. It's THE test that makes or breaks a students' future, in a sense. This is especially true if you are trying to get into a specific university or study a specific major. This is what all students are preparing for when they study. This exam is what all the high school students are studying for everyday from 8am-midnight. It's ridiculous but this is the Korean education system. So while the rest of Korea was holding their breath waiting for their kids, siblings, friends to get out of the 수능, I was sleeping in and bumming around. I went to Cafe Mama's (the coffee shop I go to around my house to lesson plan) and did some work for a little bit with Tracey. After the 수능, people celebrate and the third year high school students all give out a collective sigh. Their stress goes from 100% to 0% within a span of 9 hours(how long the 수능 lasts). They only have half days at school after the exam (they leave at noon) and most kids don't even have to go to school since all they do is watch movies and hang out from then onward. At the Yeongheung high school (Tracey's school and my connected high school), the kids no longer have hair cut length requirements so kids have elaborate plans to dye, perm, and grow out their hair, etc. Days following the 수능, parents take their kids out to eat at fancy restaurants, buy them phones, electronics, etc. It's a BIG deal. It's interesting to see it all play out because there's nothing as big in America. The SATs are nothing compared to the 수능.

So I volunteer at a North Korean Defector Program (NKD), teaching English on Thursday nights. This past Thursday was so rewarding and gratifying. I've been working with two students, both in middle school. Let's called them S and Z, to protect their identities. This past week, only S showed up and I would say that he's slightly more advanced than Z. So I started about two months ago and the goal is to get them reading by the end of the year (by the time I leave Korea). I started with the absolute basics of the alphabet. The problem is that as fast as I wanted to go, I had to work with their speed. Even though I would tell them to study at home, they never would. So the only time they really worked on anything I gave them was when they were with me for an hour on Thursday. That's why it ended up taking so long to get through the alphabet. After we got through the alphabet (which took a few weeks) and even today, Z hasn't gotten it zone, we focused on the consonant sounds. Last week was the breakthrough with S. I taught him the short vowel sounds for 'a' and 'e'. I used consonant-vowel-consonant (CVC) words to teach him and it worked. It was SO gratifying; honestly, it was more rewarding than I thought. I know I still have a long way to go and this is just one small step but it was still a step. He was sounding out the sounds like I taught him and he was getting it. It wasn't perfect but it worked. It was awesome. I'm excited to see Z this week and bring him up to speed too.

On another note, planning for Winter Break is really time consuming and kind of difficult. I don't want to travel anywhere alone, not because I can't but because traveling is just more fun when you are with other people. It takes a lot of effort to talk to a lot of different ETAs and figure out their plans and where they're going and if you are interested in going there at that time, etc. It's giving me a headache.

Following the Halloween incident where a student stole a lollipop from my backpocket last week, I decided to punish my kids. I had all my classes write lines for 15 minute at the beginning of class where they copied, "I am sorry teacher for not respecting you. I will respect you." It went awesome. I had a co-teacher translate all my slides at the beginning which explained the situation. I wanted all my students to understand why I was punishing them. If they didn't understand why I was making them copy lines, then they would just resent me. I imagined my Korean teacher coming into Korean class one morning and yelling at us in Korean and not being to understand her. If that happened, I would be so confused and angry if she punished us by writing lines. If she came in, guns blazing, and explained to us in English why she was angry, I would at least understand the reasoning behind her actions. In my powerpoint slides, I wrote out the situation in English and Korean so that my students understood. I didn't want any excuses from anyone about the punishment. It worked. I even got a few letters out of it from students, while they were copying lines. 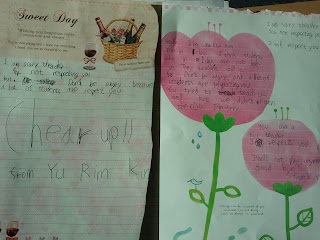 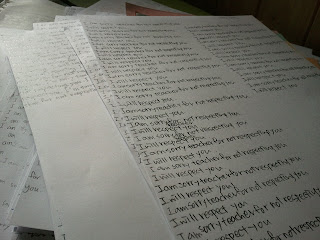 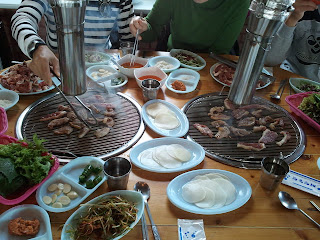 This past weekend, I didn't travel. My family had told me a few weeks ago that my sister, 지은 would be going to the hospital for a quick test on Saturday and our family would be going with her and then playing afterwards. Bright and early Saturday morning, around 7:45am, we piled into the car and drove for about an hour. Her test only took about 30 minutes. Afterwards, we drove to Gwangju and ate at a duck restaurant. It was delicious. We must've spent at least an hour and a half eating at this place. I was so full; we ate around 11am and I wasn't hungry by the time dinner rolled around at 7pm. After lunch, we went to Lotte Outlets in Suwan, Gwangju. My parents dropped bank there. I guess it's because they don't go shopping very often but they had no shame buying things left and right. For example, we stopped at the Kappa store and they dropped like 200,00원 (a little less than $200) for two track suits for my brother. It was interesting watching them go to town. After the outlet mall, we headed back home and bummed around for the rest of the day.

I'm looking forward to this weekend. I'm heading to Seoul to see all (or at least almost all) of the ETAs for Thanksgiving dinner, provided by the KAEC. It's gonna be a big shindig, with the KAEC office and the Ambassador. They go all out for us; they rent out a museum and there's apparently all the typical Thanksgiving food. It's hosted by the military and it's about $50 a head. It's gonna be epic.
Posted by Ammy at 6:41 PM