Changes in an Instant

I stayed around in Mokpo this weekend--thought it'd be nice to spend a weekend at home since I've been traveling so much. The plan was to bum around the apartment with the family a little bit and also go to my boys' soccer game on Saturday.

After school on Friday, one of Tracey's co-teacher invited us to dinner with her and her husband and kid. The family has AMAZING English. The son's English is absolutely incredible--I think it's better than all my students, honestly. Most Korean kids know English grammar in theory but can't apply it. This kid's speaking and listening ability is incredible. I was able to talk at a somewhat normal speed and he would understand and respond. Tracey tells me he reads English chapter books. That's better than most of my students. Her husband and son live in Gwangju for her husband's job. They see each other on weekends. The son is home schooled. It's an interesting concept in Korea. They took us to a restaurant and then we went to a cafe afterwards and chatted. I think her husband used to be an English teacher too since he also had really good English. We talked a lot about the education system and how different it was in Korea/Asia versus America. It was definitely a good conversation and it got me thinking a lot about how imperfect all education systems really are.

On Saturday morning, I went to my boys' soccer match. How I came to hear about it is a story. At school, I can tell which kids come running in from playing sports and which kids are more active when I visit them in PE. One specific day about two weeks ago, I was leaving the gym and saw two of my boys walk in. These two boys are what I would call the "popular kids" in my class. They are in 3-3, which used to be my worst class on Wednesdays but because they like me, the overall ability to control the class has increased significantly. The class is so much more manageable than the first few weeks and I think the boys even like me (most of them at least). Anyway, they were coming into the gym and I thought it was odd since I knew they weren't a part of the gym class I was just playing with and it was also the end of the day so there would be no next gym class. I asked what they were doing and they said they were going to play soccer. They then said they were getting ready for a contest (competition I deduced). They showed me a piece of paper with a bunch of Korean I didn't understand but I got the gist of the information. I asked them when it was and they said it would be two Saturdays away. I told them I wanted to watch them play and they started to give me more information but I told them to remind me in class when I would see them on Wednesday. They gave me information about location, 목포국제축구션터(Mokpo International Football Center), the time, 12:40pm, and the field, Star Field. It's the same place Liam coaches soccer on Saturdays/Sundays. I had mentioned to them in class that I would bring them cookies but I don't think they actually believed me when I said I would come. I also saw almost the entire team on Friday after school on the bleachers/stairs. I told them I'd see them Saturday since most of the team didn't actually know. One of the students said, "No, thank you." T.T Actually, a majority of the guys I saw practicing are some of my rowdier, "bad" students. Most of them don't pay attention in my class and manage to disrespect me in one way or another. Regardless, I was going to go. Tracey met me at EMart Saturday, around 12:30pm where I was picking up cookies. Then we caught a taxi to the soccer field and met up with Liam; he then led me to my boys. The game was already in swing and I saw my boys (I recognized their blue uniforms) so I headed over to the ones on the sidelines. They were all sitting on the turf. As I approached, they noticed me but I could tell them were looking bummed. I ended up chatting with one of my students, whose English name is Sawyer (he's in class 3-1 and has pretty good English actually). He told me the game was actually moved up to 12:10 so I was arriving for the later part of the game. They only had about 10 minutes left and the score was 2-0 (the other team) so that's why everyone was kinda depressed. The team they were playing in this first round was the team that won the competition last year. Apparently my school's team got 2nd last year. It was just unfortunate these two teams were playing each other in the first round of the competition. I told my boys to cheer up and gave Sawyer the cookies to give out to the rest of the team later. I hung out with them on the turf but other than Sawyer and the popular kid who was the main one who invited me to the game, none of the boys really talked to me. I don't blame them since they were losing the game and it wasn't looking good for them. I didn't realize which of my boys were actually on the team until I saw them playing. Half of them I didn't even realize would be out there. After they lost (3-0), they went to the other side of the field where their stuff was and Tracey, Liam, and I headed over there after a bit. I saw almost all of the gym teachers there. They all came out to support the boys I guess. I think they were surprised to see me though. I also saw a few other of my boy students, friends of the soccer players, there. All my students seemed pretty surprised to see me but none of them really questioned why I was there. I mean, it was obvious I was there to see them. Since they lost, the overall mood was kinda down. Well, they have next year...
Afterwards, I went to a family owned cafe (non chain) on Rose near my place. I graded some papers and Tracey joined me later. Around dinner time, Lizzie, Annie, and Liam joined us so we could get dinner together. We headed out to the bar, Cool Luck, after and had some random life chats and what not. It's nice to have educated conversations with people. I never really appreciate it until I have conversations with ignorant people. I am glad that Fulbright selects well though.

On Sunday, my sister woke me up. She asked me if I was going to go with our family to drive her back to college in Gwangju. Even my host brother was going so I got up and got ready after a little bit. My mom asked me if I wanted to stay at home and rest but I wanted to spend time with them so I tagged along. After dropping her off at school, the four of us went to a restaurant to eat. My mom says it's a famous restaurant in Korea. It was delicious but it wasn't the best thing I've had. It's nice to spend time with my family doing random things even if it's nothing too exciting.

So, again, I leave things for the end. I found out tonight that my grandma passed away yesterday morning (EST). I called my mom tonight with the intention of asking her if she was still planning on coming to visit in February. She got on the phone and said, "Don't cry that grandma's gone." I was in shock. I made sure she said grandma. Apparently she told my brother to send me a message through Voxer (a texting app we use) yesterday but he never did. So I'm not sure what happened but she's been sick and in the hospital for some time now (since my grandpa passed away). I was told she had colon cancer but even that, I'm not sure how true it is. So my mom told me this information and I just...didn't know how to digest it. It's a weird situation since my mom has always been closer to her dad (my grandpa) than her mom (my grandma) so I've grown up being trained to be "biased" towards my grandpa. In reality though, my grandma was the one who raised me. I remember how my mom and grandma would always joke about how my grandma would stick her tongue out with saliva and as a baby, I would just suck it up. It sounds disgusting now but as a baby, what can you do? My mom's family dynamic is a bit complicated so I won't get into it but my mom always had something against my grandma and I don't think she ever forgave her. So even when we were on the phone talking, my mom was talking negatively about her mother that just passed. I was getting angry and told her to stop talking about her negatively. My mom said something that was pretty attacking so I hung up. I sound like an ungrateful daughter but again, this is a weird situation to explain. It's family issues. I am kind of in shock. It hasn't hit me. Actually, it hit me on Friday that I have no living grandpas left. Now, today, I only have one living grandparent alive. Wow. Life really just changes in an instant. I think I need more time to just think about this. My grandma wasn't a Christian. Even in the hospital, she refused to believe in it. This is what makes me saddest. 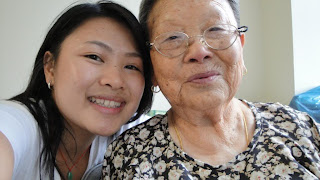