In Korea, teachers are well-respected and that's the norm. Since our teachers have been so good to us, our Korean class took out both of our teachers for dinner on Friday night. Actually, all the classes have taken out their teachers. It was really nice to get to hang out with them outside of the classroom environment. I also learned a lot about them while we were at dinner. The first teacher studied abroad in Australia and in China for a year each. The second teacher studied in the UK. What the heck man. They are so smart, it's absolutely ridiculous. They took us to Shanghai Restaurant in Goesan and it was Chinese-Korean food. 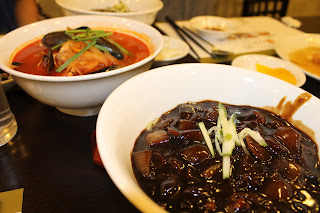 It was actually pretty decent. We also stopped at Tour De Jour for poppingsu with them afterwards. So good. 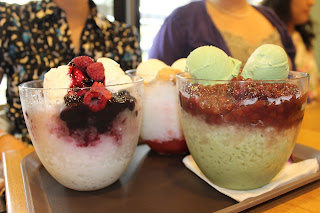 I actually really like our Korean teachers. They're cute and super nice and friendly. It's also good to know I'll have some friendly faces when I visit Seoul sometime this year. 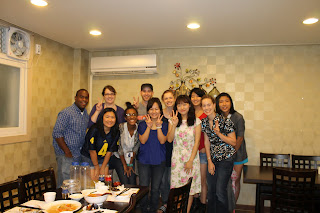 On Saturday morning, some of the ETAs went to Cheongju for a cooking lesson. I signed up for this extracurricular at the beginning of orientation so I was on the list to go. We went to a cooking hagwon and learned how to make Kimbop and Bulgogi. We watched the instructor make it and then we would go to our stations and do it in groups of fours. The directions are simple enough and I think I will be able to make it on my own sometime. 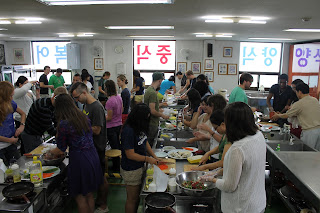 It was delicious and we had so much food leftover.

Everyone split and did their own thing after that. Some people went back to Jungwon to study or meet up with their class groups for their project/skit, some stayed in Cheongju and shopped, etc. I ended up walking around (and actually bought a shirt for 5,000 won whee) and got a really delicious hot dark chocolate icy drink.

I think I have an obsession with food. It's not a good thing. But nonetheless, when in Korea...

I got a chance to go to church with my teachers today. I ran into one of them while in the elevator and I found out the teachers were all going as well. We went with them to a Presbyterian church in Goesan this time, instead of the Methodist church we've been to. The service was still in Korean (what did you expect) but it was interesting to sit there in church with my teachers. Christianity is a pretty big part of culture here even if Confucianism values are ingrained in the society. I feel that most of the population is Christian though.

So I keep telling people that I wish I had brought *insert random item* to Korea. In my packing list, I wish they had just told us to bring whatever we normally use on a daily basis. This is more specific to clothing than anything else. The Orientation Packet we received should have told us to bring whatever we wear on a daily basis. Then it should have had a clause that this only applies if you wear non-suggestive clothing. Let's be real, I'm pretty conservative in my dress in America so had I brought what I normally wear in America to Korea, I would be perfectly fine here. There is only one real exception to that rule which are tank tops since I wear a lot of those in Florida... I'm only ranting about this because this point of topic comes up pretty frequently. With most of the girl ETAs here, there's this commonly shared feeling. Why were we not told we could wear most of our normal clothing? The packet made it seem like the girls here are UBER conservative and cover every part of their body with the exception of their face and hands--seriously. I was even concerned that my shorts were too short--and they definitely are not. I mean, I didn't bring certain shorts because of that, any of my skirts, casual dresses, certain shirts, etc. And now that I'm here, I realize that all my clothing would have been perfectly acceptable to wear here. It's just frustrating is all.

On another note, I've stayed up pretty late talking to some of the other ETAs. I think I'm starting to build real friendships the longer Orientation has gone. The sad part is that we will all be splitting up and going our separate ways in about a week and a half. Even last night, I went to a coffee shop in downtown Goesan with Payal and Anna and that was nice. We studied for most of the part but it was nice to be with good company; it almost felt like we were back in college again. So there was a meteor shower last night that I found out by passing Sara in the hallway. I googled it and it was apparently the time for the Perseid Meteor Shower so a bunch of us went out onto the track and laid down on the court. We saw a few "fireballs" or flying stars but again, it was just nice to be in good company. Now that I'm getting comfortable with certain people and having real conversations, I have to go to Mokpo for the year. This is why I'll miss Orientation. It's just so simple here in Goesan.

So the more I am thinking about the year, the more I feel unprepared. I should write down goals for my students, for myself, for the things I want to accomplish in Korea, etc. I'm also rethinking my entire lesson plan for the first day. So I heard that one of the past ETAs was extremely scary the first week and he had no classroom management problems after that. On the first day of each class, he picked a "sacrificial lamb" that he made an example out of. So for example, if one kid was misbehaving (in even the slightest way), he would call them out and send them out into the hallway. The kids would immediately take him seriously and he would have no more problems for the year. I think that's my plan as of right now. I'm a bit worried about it though since I'm at a co-ed school and girls can be more unforgiving. Boys will get over it in about a day while girls will let it fester and they'll become bitter towards me. I still have to think it all through but I think this tactic will make the kids hate me at first but sometimes it needs to be done.

I'm starting to feel guilty about being busy here too. It's hard for me to explain to friends and family back home what I'm doing here in Korea, let alone at Orientation. Even friends who understand the idea of Orientation think it's all fun and games. The truth is, I'm really busy. On a regular basis, my day is pretty packed with class, workshops, homework, office hours, meetings, etc. Then you throw in creating skits for your class presentation, writing a speech to present in front of your class, being on the ETA Talent Show committee, etc and you realize just how little time I have. Finding time to skype and keep in touch with people is pretty difficult. I think that's part of the reason why I'm excited to leave for my homestay. I'm ready for a rhythm and schedule that I can learn how to navigate through. For that reason, I am a bit excited to leave Orientation.
Posted by Ammy at 10:52 PM