So This is Korea

Today was the first day of Fulbright English Teaching Assistant (ETA) Korea. I'm here. Finally. And yet... it hasn't hit me yet.

The flights were not as efficient as they could have been. Most of the ETAs were flying out of LAX (Los Angelos) or JFK (New York) for Incheon, Korea. I was flying out of FLL (Fort Lauderdale) and ideally, I would have taken the JFK flight since it's closer to me, etc. What I ended up getting was a flight to LAX with a layover in Houston, TX. I left my home around noon on July 3rd and did not depart LAX until 1am on July 4th. Since LA is on Pacific Time, it was really actually 4am for me. It took over 12 hours for me to travel within the United States. That is ridiculous. I was exhausted but it worked out okay. About 60 or so other ETAs were all gathering in the LAX terminal, making initial contact with one another, etc. It honestly felt like Freshmen Orientation all over again. Being so tired, I didn't make as much of an effort to get to know everyone as I could have.

When we finally took off, it was about another 12 hours and change until we would land in Korea. I actually got a lot more sleep on the plane than I expected but I guess it helped that I was exhausted. We landed, deplaned, went through luggage and customs, and found the Fulbright Orientation Coordinator Team (OCT) in bright orange shirts waiting for us and providing guidance on where to go. We still had to wait for the buses however and didn't actually leave the airport until around 8am.

Our final destination where we are having a 7-week orientation is Jungwon University in the town of Goesan, North Chungcheong Province. It's about a 2-3 hour drive from Seoul. The university is, in essence, one extremely large building. The OCT calls it the Marble Palace because well, the entire place is marble, and it looks like a palace. It's huge. Since it's summer vacation right now, it's extremely quiet, which makes it all a bit eerie. We found our rooms to be incredibly narrow. I'm not quite sure if it's the best architectural design for space efficiency, but hey, what do I know--I studied Business and Political Science.

Our day was packed with our first group meeting, a mini tour of the university (locations that we'll need and use), and meals. I also got a chance to work out at the Fitness Center for a bit. Something that surprised me was the amount of older people at the gym later at night. Usually, I will see an older group when at the gym during the day but less frequent at evening, at least in the US. I almost think there were more older folk at the gym than the younger crew.

I'm exhausted and falling asleep at the computer so it's time to end this post early. I will just have one last remark: it still does not feel like I will be here for a year. I'm being surrounded by other ETAs and Americans so it won't feel like I'm truly immersed in the culture until my homestay. That, I'm looking forward to. 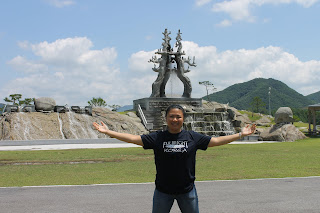