I honestly didn't realize I would be so busy at Orientation. For some reason, I thought we would ease into this whole teaching in Korea for a year thing... that has not been the case. Even my weekends feel busy, with excursions and studying and what-not.

Sunday was ridiculous, in the most epic way. So I signed up for an optional excursion with Anthony and JR. It was marketed as a "Scenic Nature Walk" that would led up to a waterfall where we could jump off of it and swim. Now that I can safely declare I'm alive and well, let me just note that the excursion turned out to be a Xena-style River Adventure Forest Nature Climb. It was unexpected for all of us, even the OCs. I know this because both Anthony and JR were wearing flip flops/sandals. Everyone else in our group was wearing bathing suits under our clothes, t-shirts, shorts, and mostly sneakers. We got onto the bus in town and the ride was supposed to be about thirty minutes. It is important to keep in mind that neither Anthony nor JR have been to this waterfall before so we were walking in blind. Anthony had only Googled it and looked at pictures. So the driver told us to get off at a certain stop (which we would certainly find out he let us off one stop too early).

There was a path at first and it was scenic for sure. 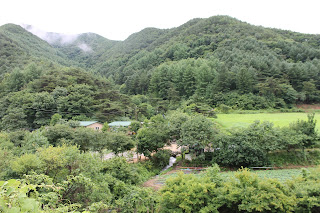 There were a bunch of pretty houses around and a lot of green. We also saw a lot of Koreans in hiking gear. One thing I learned on this trip is that Koreans take their hiking extremely seriously. Every ajumma and ajosshi we saw was super geared up, with hiking boots, hiking pants, hiking packs, hiking sticks, the whole get-up. This path wasn't very hard either. Anthony, being the fluent Korean speaker in the group, asked some people for directions and we followed the path. So what happened was that we were told we needed to cross the river. This is the river that is downstream from the waterfall and the current was actually pretty strong. 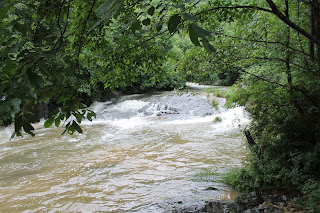 So somehow, miraculously, Anthony got over the stream safely. He then broke off a tree branch (quite a large one) and each of us walked over the river one by one. My description does not give enough justice to what actually occurred. Andrea tried to go over after Anthony, before he got the stick, and she actually slipped and started to go downstream until she held onto a rock and Anthony got to her and was able to grab her hand. If that had not happened, she would have been a goner. Actually, Bridget was the only one who made it across (walking-wise) while holding onto the stick. Everyone else held onto the stick and tried to walk over but we got carried away by the current and had to get pulled in through the stick. I'm being totally serious. It was RIDICULOUS BUT AWESOME. I don't want to be dramatic and say I was staring death in the eyes but I think I only feel that way because no one got seriously hurt. Had Andrea actually gotten carried down with the current, I would definitely say otherwise. I mean, it was dangerous in the sense that it could have actually led to some dangerous outcomes but in the end, we were safe.

So crossing the river was hard enough and we thought we were in the green and would reach the waterfall soon. There was a path... for the first ten minutes. Unfortunately however, we found out very quickly that the path ends... so we ended up walking on rocks, on the edge of the river really. By this time, my sneakers and clothing were obviously completely soaked. Luckily, my DSLR kept dry in my backpack (which was thrown across the river). I could tell we were touching things (trees, rocks, bark, moss, etc) and stepping in places (inbetween rocks, on river sand, etc) that no one has ever touched before. We must have walked for thirty minutes or so. Then we saw two guys across the river from us (from the same side we were initially on). They were the first people we had seen in a while. As you can imagine, there was no one else crazy enough to follow our... unmarked path. We yelled for their attention and they said that the waterfall was on their side and we should cross since the current would only get stronger as we walked further upstream, closer to the waterfall. We had to cross the stream again. We had the same drill. Anthony got across miraculously and got a stick for us to hold onto as we walked across. 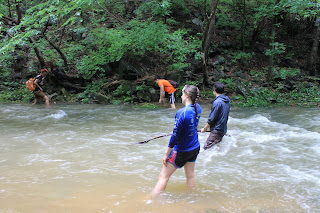 From here on out, it was 100x easier. There was a real path to follow and it was not strenuous at all. The part that sucked the most, for me at least, was the waterfall. It was so anticlimactic. There were stairs that led to a "scenic" view point of the waterfall... which to be honest, was not that pretty. There was barbed wire at the cliff, where the waterfall begins. It was very obvious that we were not allowed to jump off or swim. I was confused since we were told we could jump off and swim by Anthony and JR when we signed up for the excursion. 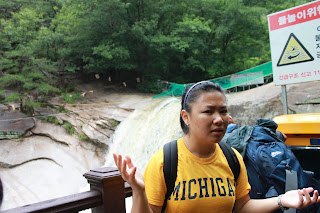 I found out later from a local that two guys had died last year at the waterfall (details unknown) so they made regulations to prohibit swimming there now. We also found out from the other tourists there that the bus stop was 15 kilometers away (a little less than a mile) and there was a real path that led from the bus stop to the waterfall. This was a facepalm moment. The bus driver gave the worst directions ever. Luckily, no one got hurt, and had an epic adventure that I thought was fun. 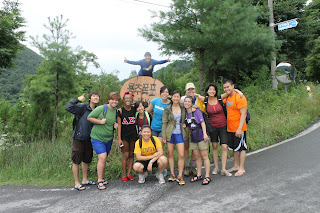 We split up to get food while in town so we all got back to Jungwon University at different times. My group was feeling pretty icky but someone suggested we go to the spa since we could shower there and it would be relaxing, etc. I was hesitant at first but decided it was only $2 and it was a Sunday. Well... the spa was an adventure in itself as well (at least for me). So I'm calling it a spa because I think that's what it's called but it might have a different name. So essentially, there are hot pools, a cold pool, showers, and saunas inside. In the one at Jungwon, there's also a swimming pool attached to it. That's not the part that took me offguard. So since it's gender segregated, everyone goes nude. I went with Kathy, Monica, and Stephanie. Apparently I'm the only one who hasn't experienced a nude spa before... So to make this story short, I got over it. I am a firm believe in thinking that things are awkward only if you make them awkward. And since we're all females, we all have the same body parts so it's not like we haven't seen something before. It actually turned out to be an awesome and relaxing experience. The hot water pool felt relaxing (like a jacuzzi) and the saunas were pretty good too. I felt my skin when we left and it was softer. And it was, oddly enough, a bonding experience for the four of us. We are trying to make it a weekly thing so we can relax and let loose.

The rest of the day was spent studying and attempting to come up with a lesson plan for Camp Fulbright.

Today was the start of another week and it's busy, per usual. Class was four hours, with a quiz at the beginning. We had a workshop (this one was about games so it was a lot of fun since we actually participated in some) and then I had TKD and Bible Study (on Mondays only). It should be noted that we did get our TKD uniforms in and we look super legit.