I think I will actually really enjoy my weekends here in Goesan. Today I got to go to an Archery lesson, as one of the extracurriculars, in town with a world famous Archery coach, Kim Hyung Tak. He's really respected and has coached many Olympic teams. He never participated in the Olympics but we were talking to one of his students (a Korean American girl who's training to make the 2016 Olympics team) and apparently he's coached many people who have won Olympic medals. There was actually a guy who will be in the Olympics this year for Fuji who was practicing. We got a chance to see him shoot two balloons on a target about 70 meters away. It was pretty cool. We had very quick lesson (it was literally 15 minutes) but we got to shoot six arrows three times. I'm not bad, but I'm definitely not good either. 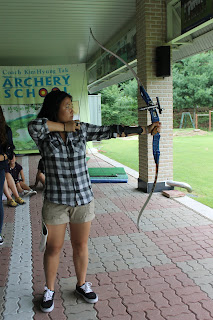 While it's been a fun week, I'm starting to lose some of the initial steam I had. I was so gun-ho about everything but now that my body had adjusted and I'm realizing Orientation is two months, I am slowing down. Well, to be frank, I think the language classes had a lot to do with this. While the first few days of Korean language class weren't too bad, the pace on Friday's class was exponentially faster. I'm realizing as I take more and more language classes that I'm not exactly the fastest language learner. I can pick up on slang and phrases I think but learning the basics takes much longer for me. Well, Friday's class totally crushed my spirit because the teacher went really fast and we have a test on Monday that covers a lot of stuff I don't know. Even words and phrases I think I have memorized don't seem correct because when she says it in class, I don't recognize it. I'm actually REALLY worried about language class.

On the other hand, the workshops have been really good. There have been some that are drier and harder to swallow than others, but they are all informative and helpful. The more and more we learn on a daily basis, the more excited I become. I'm still unsure what grade level I want to teach. I've been thinking more about the pros and cons of middle and high school every day as more ETA speakers come in and talk during the workshops. While I know I can't determine my placement, I'm still figuring out what I want.

Since I've been out quite a few times since being here (last weekend and last night), I'm trying to stay in and study tonight. I also need to prepare my lesson plans, which are due Tuesday. So we are participating on the teaching side of Camp Fulbright, a two week English camp for Korean students. This year, the theme is Hollywood movies. We are required to teach three forty-five minute lessons to ten students, who are separated by level. For the first two lessons, I'll be working with those whose English is considered High Beginner under topics "Documentary" and "Epics/Historical". For the last lesson, I'll be teaching High Intermediate under the topic "Comedy". I have no idea what to teach but I have a few more days to think about it.

I don't feel like I have a lot of time to process as I need to cram Korean in my head.