Daw, I got a "skin power solution cleansing moisture cleansing foam special set" from one of my students, Juna for teachers day on Tuesday. I also got a card, a letter, a drink, and some flower clip. 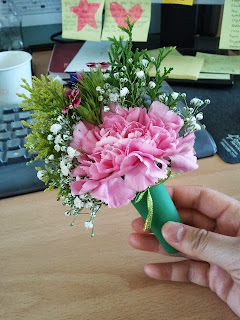 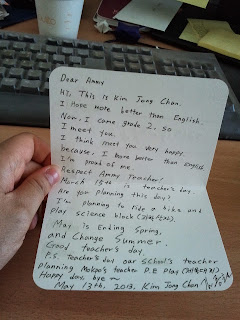 Apparently it's common for students to bring in gifts for their teachers on Teachers Day, which was Wednesday. There wasn't school either so the teachers had the day off. And when I say "day off", what I really mean is there was a interschool volleyball competition against other schools in Mokpo. Regardless, there were no classes to teach so that was kind of nice. The thing is, I really love my kids. I do. I just really don't like to teach them. Individually they're amazing, sweet, thoughtful children. As a group, they are a terror to society. Yep. I said it. It's not true for all classes, but it's true for a lot of them.

So yesterday, for Teachers Day, there was an interschool volleyball competition. Mr. Lee picked me up at 9:30am and we headed to the co-ed high school in Mokpo where the competition was going to be held. So I thought this competition was going to last half a day or something but I ended up leaving around 6pm. A bunch of teachers were there and Tracey was playing for her high school. Sara was there playing for her middle school too! I was there... to take pictures and support my school. :)
It was actually kind of fun. There were some students' mothers there and they had set up a huge picnic like thing in the grass outside the auditorium under the trees. I hung out there eating the food they had prepared (skatefish-the fish that ferments in its own pee, pork, kimchi, almonds, jerky, cherry tomatoes, watermelon). Before 10am even hit, I already had 2 cups of makeoli (rice wine). The teachers kept urging me to drink because they know I can drink. So the competition was an elimination tournament. Once your team loses, you can go home. My school ended up in 2nd place and Tracey's school tied for third. We played her school in the third round. Tracey played Sara's school in the second round. My school lost to Mokpo Vocational High School and they were pretty good. I pretty much got fed on the school's dime the entire day. For lunch, we walked to a nearby restaurant and after we lost in the Finals, we went out for dinner at another restaurant. I was told that we got some cash prize for second place and that was the reason we were going out for dinner, but I think we would've gone out regardless. At dinner, there was one specific teacher who kept telling me "one shot". I was eating and he beckoned me to his table and kept pouring me a full glass and then saying "one shot". I actually did take chug two glasses but on the third one I finally realized he wouldn't stop saying it so I needed to stop doing it. All in all, I will just say that the ahjusshi teachers at my school can drink like sailors. I left around 9pm to meet up with the rest of the Mokpo crew since it was our weekly Wednesday hangouts. It was a pretty long day but fun nonetheless. At dinner with the teachers, I was realizing how much I will miss the teachers at my school. I really do like them and I think they like me too. I think I'm pretty close to them compared to the past ETAs. In fact, I'm going hiking with a few of the ahjusshi teachers tomorrow at 6:30am. As I was taking these "one shoters", one of my favorite third year homeroom ahjusshi teachers told me it was his birthday on Friday and he wanted me to come with him to go trekking. How could I say no? I've built so much 정 with these guys. So, that's my plan for tomorrow. I'm getting up at the crack of dawn to go climb a mountain.
Tomorrow's Buddha's birthday, a national holiday, so the kids get the day off. I guess that explains why my kids were so restless today. They had the day off yesterday and the day off tomorrow so this random day sandwiched between makes them a little crazier than usual. This will be a nice long weekend.
Posted by Ammy at 12:51 AM