So the Damyang Bamboo Festival two weeks ago was a lot better than I expected. I mean, think about it--how good can a festival centered around bamboo actually be? The truth, pretty darn good. There were two parts to it, a bamboo forest (literally felt like I was walking around in the forest in the movie, Crouching Tiger, Hidden Dragon) and the festival itself. Now my favorite part of the entire thing was the bamboo ice cream we had. IT WAS SO GOOD. There was like a woody flavor to it. It wasn't particularly sweet but it was delicious. It was so good I got two cones. After we ate it, we even got popingsu. That's how good the ice cream was. Christina and I met up with Em, the Mokpo mentor, and her non-Fulbright friend from Gwangju to walk the bamboo forest together after we ate lunch. Christina and I really wanted to try a place where they cook the rice in bamboo and then give you the bamboo to eat the rice out of. It was actually pretty cool and the rice had a tinge of sweetness to it. 'Twas a good time.

When I got back on Sunday night, I had to get to Tracey's apartment after eating dinner with my host family. Tracey's school festival was on Tuesday and we were going to perform in it. By Sunday night we were still trying to figure out what we wanted to do. Tracey wanted to sing/rap a song that her students would know. We decided on B.O.B./Bruno Mar's "Nothin on You" because apparently Koreans know that song pretty well. Well, about four hours later, we had made a mash up of "Nothin on You" and Lil Mama's "Lip Gloss". Honestly, it was a lot of Tracey with some small input words from me, which worked for me because it meant less work haha. I mean, it is her festival and we were performing for her kids so she should be the star of the show. On Monday, we had to go to the dress rehearsal and ran through our performance on the stage with microphones. It's a lot harder when you perform on stage and with mics. After the dress rehearsal (after everyone else performed and we kicked out the rest of the students in the gym so we didn't have to do it in front of anyone), Tracey and I realized we had a lot to work on so we went bsck to her classroom and practiced again for a few hours. The festival itself started at 5pm on Tuesday so after my classes finished on Tuesday, Tracey and I practiced again. Her kids' performances and the festival itself were awesome. Apparently the high school festival is a much bigger deal than the middle school one too. She didn't have to teach on Tuesday; instead all the homeroom classes had some type of fundraiser like selling food, doing tarot card readings, selling air fresheners, throwing water balloons at someone's face, etc. I walked around her school on Tuesday and kids were just having fun and it was adorable. They aren't even my kids and I thought they were so cute. The festival itself lasted until about 9:30pm so it was a long show. When Tracey and I got onto stage, her kids were screaming for us. It was cute. A lot of my old students were there too; friends of the students from other high schools come to support their friends and a lot of them were my old kids. It went fairly well I'd say. We just had some fun on stage. Afterwards, Tracey and I went to the flower shop and the bakery to pick up carnations and a cake for our host parents since it was Parents Day the next day.

Tracey's school had sports day for the next few days after the festival. Her kids were running around on the field playing various sports and competing against other homerooms. I could hear the screams of fun from the windows when I was teaching. My students were distracted too and wanted to play, I'm sure. Payal also came to Mokpo Wednesday night. She stayed with Tracey on Wednesday night and with my host family on Thursday night before leaving for Busan on Thursday. She said she had a good time in Mokpo and liked it. She had this perception that Mokpo was a small town, like Naju or Hwacheon, but was pleasantly surprised at how big it actually is. It was kind of funny to see her surprised. She met Tracey's kids and my kids too. She came to one of my really bad classes and also sat in for a little bit in one of my really great classes. According to her, our bad classes are very similar. However, my good class is better than her best class, which was interesting to hear.

On Saturday morning, this past Saturday, I headed up to Seoul for my dentist appointment and for the Dream Concert that night. I started my root canal treatment, which is cheaper to get it done in Korea than in America. It took an hour and a half because of some complications. So there are four nerve things in one tooth and the dentist in Korea could only get into three of them. He took an x-ray and apparently the guy who started the root canal back in America had gotten a small piece of the drill suck in one of the nerve things. YEAH. So he had to work around it and since it's impossible to get it out, he just left it in there and filled it in with the temporary filling. I'm going back next Saturday for the next part of the root canal, which is not exactly what I call fun.
Saturday night, a bunch of us got tickets for Dream Concert, which is the biggest K Pop concert of the year pretty much. There were 22 groups there and we got awesome seats. It was Courtney, Monica, Katelyn, Amy Tseng, Annie, Anna, Tracey, and me. We were seated literally next to the stage. I could see the groups right in front of me. I didn't have to look at the screen at all during the concert really because they were so close. 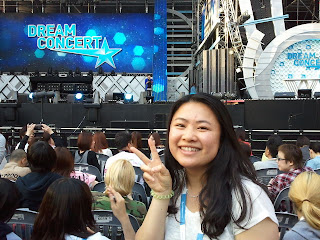 There were times I could see the sweat flying off them as they were dancing too. It was insane how close we were. So I really like Infinite and LOVE Hoya. He's probably the best dancer in the group and he's a singer/rapper in the group. He's amazing. I first learned about him from 응답하라 1997 (my favorite Korean drama) but have come to fully appreciate him. Anyway, I made a sign for him. Yes, I literally made a sign. It said Hoya (obviously) and "You are my favorite singer" in Korean. So long story short, I was trying to get his attention and he didn't notice me during Infinite's performance BUT when they all came back on stage at the end of the concert, I got three waves from him!!! It was pretty much the highlight of my day. I got a bunch of waves from other groups and other members but I just wanted at least one wave from him (and I got three!). In fact, if you go to this youtube video (http://www.youtube.com/watch?v=dG75yiIaHq0) and watch from 0.15 to 0.20seconds, you see Hoya scanning the crowd, nodding, and then waving. HE'S WAVING TO ME. I'M NOT LYING. I was sitting right there and holding my sign up high. I saw him read it, made eye contact, and then I waved to him and he waved back. It made my day. Really. The lineup was: Rainbow, EXO, B1A4*, Huh Gak, Girl's Day*, Boyfriend*, BTOB, U-KISS*, 2AM, Secret, INFINITE*, KARA, ZE:A*, VIXX, EvoL, Speed*, T-ara, 4minute, Sistar, BEAST*, SHINee, Girl's Generation. The names that I put * next to means that members of those groups waved to me. That's how close to the stage we were. It was such a great concert. It's ruined all future concerts for me though because I don't think I can ever sit in the nosebleeds again and enjoy it. I just want to relive it all over again.
I left Seoul early on Sunday morning because it was my host brother's birthday and I wanted to get back to spend the day with the host family. I got back right in time for lunch and then we went to see Iron Man 3 together. Then we did dinner out with the host family. It was a cute celebration; I got my host brother a Messi jersey from Itaewon, which I think he really liked. His favorite team is Barcelona.
Monday morning was such a drag. It sucked to have to come back and teach after such an epic weekend. On top of that, I lost my USB somehow. I taught a class, unplugged it from the computer and put it on the table. I didn't even walk out of the door of the classroom before it somehow disappeared. I don't want to blame the students, especially because the class I lost it in is a good class, but I honestly have no idea where it went. I searched all around the room, and frankly, there's no way it could have gone far. It's a distance of five feet from the computer to the table I put it on. I have no idea where it went. Anyway, the day was just kind of a hot mess.

I keep thinking to myself that everything is coming to an end soon. It's true; it really is. I literally have a little less than 2 months left in Korea. It's an odd feeling. Honestly, I do love Korea. It crept up on me. I didn't fall in love with Korea immediately but it grew on me. Analogy wise, if Korea was a man: it definitely wasn't love at first sight, but after I got to know him, I fell in love with his quirks and the way he was. I didn't even realize I was in love until I realized there was a deadline to the relationship. That's how I feel about Korea at this moment. Sure there are a ton of things I really don't like about Korea but this country is a lovable place. It's changed me and reverse culture shock is going to be really interesting, I'm sure.