YOLO to the Fullest

Since I didn't have any real plans this past Saturday, I decided to throw some caution in the wind. I also realized that I haven't spent any weekends with Tracey in a LONG time. Last semester we traveled a lot of weekends together but since coming back from Nepal, she's been busy with OCT stuff, GRE studying, etc. so we've done our own thing on the weekends. The last time we spent a weekend together was Psy's concert back in April and this past weekend was the last opportunity we'd have to spend some time together before she leaves for Orientation and I leave for America. A few months ago, we also walked by the Ritz Carlton and said we should spend one night there as part of a YOLO experience. So...putting those together, Tracey and I decided we should spend one night in the Ritz Carlton Seoul and make it the point of our weekend. Using Agoda to find a decent deal, we got a room and got Amy T, Hemma, and Maggie to join us in our YOLO weekend adventure. Tracey and I headed up to Seoul late Saturday afternoon and met up with Maggie in Insadong so the two of them could shop for end-of-the-year gifts from their homestays. Afterwards, around 9pm, we went to The Ritz to check in. IT WAS SO NICE. It is a 5 star hotel and it lives up to it. Amy and Hemma were going to join us around 10pm because they were at a concert. We decided to class it up further by grabbing two bottles of wine and some desert before settling in for the night. Tracey and I called dibs on the bathrobes and it was worth it. 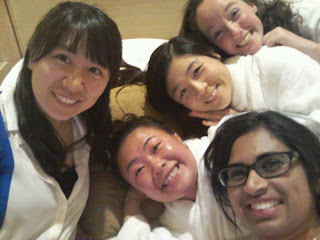 It was a nice girls night in...in the most classiest way possible. We chatted, watched movies, drank wine, etc. The good life. Hemma, Amy, and I chatted a little longer until 3am. Unfortunately, Hemma had to leave really early, around 8am but I got up a little later, before the other girls to check out the gym. I mean, it's the Ritz Carlton gym; it's got to be nice. I was right. It was huge and each cardio machine had this touch screen tv/machine control panel. It controlled everything. It set the speed, timing, etc of the machine and it also controlled the tv. You could also surf YouTube and wikipedia on it. RIDICULOUS. The girls slept in and then we did a late check out (to make the most of it) and watched Star Trek on tv while we kicked it. Sarah J and Payal came to the hotel and hung out with us in our room; they were in Seoul for Ultra and had a rager of a time. After lunch with the girls, I headed to the Fulbright building for a North Korea information session since that's where I'll be headed in less than a month! Arthur gave us some logistics and answered questions we had. I'm pretty stoked about going.

Such a good weekend probably explains why Monday was so hard. I have about 4 weeks left (including exams) but about 2-4 classes left with each class. When I told my third year classes, they seem pretty bummed about it. When I told my first year and second year girls classes, they also seemed a bit bummed, but not as torn as my third years, who I've taught two semesters now. When I mentioned it to one second year boys class, they cheered and clapped. Yep, there's a reason they're my worst classes. THESE DANG KIDS.
Posted by Ammy at 7:39 AM