Well, 2013 has already started to move faster than I'd like. It's already more than week in...

Highlights of the beginning of 2013:
New Years Eve: I trekked up to Seoul with some Mokpo crew. We met up with some people and got lunch and then we left for Bridget's gathering/pre-game. Bridget's cousin has an apartment in Seoul but he was traveling with his wife so he left it in Bridget's hands. There were some appetizers, wine, music, and good company. 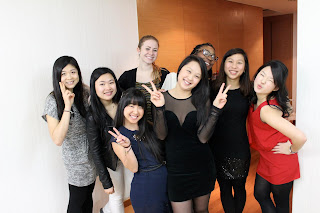 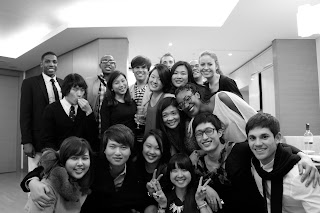 Afterwards, we split up. I was part of the earlier group who wanted to make it out to Hongdae before midnight. We met up with another ETA group at Bar Zen and that's where we rang in 2013. Some of Tracey's Rice friends were also there; two of them were visiting Korea from America. A bit after midnight, we went to the club, Harlem. Around 2:30am or so, I saw some of Tracey's college friends so I knew she was around. I was told she wasn't feeling well (too many drinks too fast) so I went to the bathroom. I ended up switching on and off with Jaeyon throughout the night watching her, holding her hair in the bathroom, etc. Around 5:30am, the remaining ETAs (minus Jonathan, of course) decided to call it a night and head back to the hostel. I half walked, half carried Tracey back and by the time I showered and passed out, it was 6:30am. Definitely a more party-toned New Years Eve, to say the least.

New Years Day: We woke up around 11am (not bad for sleeping at 6:30am) and met up with a bunch of ETAs for American brunch in Itaewon. Afterwards, most people went their own way but a few of us (Nic, Liam, Lizzie, Tracey, and me) went to the Korean War Memorial Museum, which was pretty cool. Afterwards, Tracey and I had to meet up Payal and Anna because Payal's family was in town and she wanted to introduce me to them. We met them at a restaurant while they were eating dinner; soon afterwards, they headed out to Incheon because they had an early flight back to the States the next morning. After we met them, Tracey's Rice friends met up with us again and we went out to dinner with them. At this point, other people started diverging as well. Nic headed back to Gumi, Payal and Anna went to Payal's hotel to plan some travel stuff, two of Tracey's friends left for their respective homes in Korea (one is also a teacher in Korea). I went with Lizzie to her hostel to pick up my bags, which I had dropped off earlier that morning so I didn't have to carry it all day. Afterwards, we (Lizzie and I) met up with Tracey, Eric (one of Tracey's Rice friends), Payal, Anna, Jet, and Vlad (Jet's brother visiting from Japan). From there, we planned on staying up all night until 7am, when Eric would have to go to the airport and head back to America. Our first stop was to a bar; it was a chill bar where we sat around with our drinks and just chatted without any loud music blaring. From there we grabbed some drinks from a convenience store and hit up a 노래방 where we sang for a few hours. Eric introduced a new drink to us--soju and coffee. It's actually pretty tasty. At this point, it was around 4:30am and I was starting to get hungry so we hit up the Taco Bell. Unfortunately, chalupas were not on the menu so I stuck with a grand crunch supreme (yes, these are important details for this blog). It was delicious. Payal and Anna were tired and Payal wasn't feeling so hot so they headed back to their hotel. Tracey, Eric, and I were planning on going to a DVD 방 where we could watch a movie before heading to the airport but we ended up going to a cafe instead. There were a lot of people up and awake surprisingly. There were at least a few other groups in the cafe too. Seoul is definitely an interesting place with insomniacs. Around 7am, we headed back to Eric's hostel to pick up his stuff and then we hailed to Seoul Station where he would be able to take an express bus to the airport. From there, Tracey and I headed to Payal's hotel, where we were gonna pass out for a few hours. I ended up passing out around 7:30am or so and then waking up around 11:40am to make it out in time for checkout at noon. What an interesting two days of 2013.

January 2nd, 2013: I can't remember much of what we did--probably cause we didn't do much that day. Anna left really early, before I even woke up, because she needed to spend time with her grandparents. Payal, Tracey, and I went to Myeongdong 명동 and got some lunch. Then we sat and chatted in a cafe while waiting for Lizzie to find us. Payal had to leave for Busan to pack before going back to America. We shopped around and Sarah Joo joined us too. After dinner, I left with Sarah to stay at her aunt's place for the night. The plan was to meet up with Tracey the next morning to go to Daejeon and spend a day or two there. I was also planning on meeting up with my host family since they were in Daejeon hanging out with my host dad who's starting a new travel agency office there.

January 3rd, 2013: Sarah and I headed to Seoul station early in the morning and met up with Tracey to take the KTX to Daejeon. When we got there around 2pm, we met up with Jonathan and got a late lunch. Then they took us to Yuseong Spa where I got scrubbed head to toe by an ajumma for 16,000won. It was so worth it. I felt so clean afterwards. From there, Nina met up with us for dinner at a burger place. The day was really relaxing and I definitely felt like I was on vacation since all I did was eat, sit in a spa, and eat. I didn't get any more productive after dinner either. We went to the center of downtown and waited in line at this club/bar thing. We must've waited for an hour and change. We weren't even sure if we'd get in because they don't let foreigners in usually. This was THE bar though and Nina said they play 80s and 90s Korean music with a few other songs mixed in. She didn't sell it well but it was actually a lot of fun once we got in. The DJ plays some chill music in the background and every group has their own table or what not (like a restaurant set up). There is a huge dance floor in front of the DJ though. Then every 15-20 minutes, the DJ darkens the room and plays dancing music and almost everyone hits the dance floor. After another 20 minutes or so, he goes back to the chill music and people go back to their tables and eat, chat, etc. It was a good time. The Koreans were definitely getting into it. Around 3am, we all split and headed our ways. Tracey and I were staying at Sarah's homestay place for the night. She's got an interesting set up. She's one of the few ETAs who lives in a home and she lives on the first floor while the rest of her homestay family lives on the third floor. She has her own apartment, if you will. Even when Sarah asked her homestay mom if it was cool if we stayed with her, her mom told her to do whatever she wanted because it was her apartment.

January 4th, 2013: I ended up not meeting up with my host family in Deajeon because they were far away at a mountain and it was going to be a hassle to get to them. The three of us ate lunch with Sarah's homestay family, who are really cool. They're a very dynamic and funny family. I actually think I could fit in really well with their dynamic if they were my host family. The host mom is a hoot and jokes around with her daughters, etc. It's hilarious and crazy to watch. After lunch, Tracey headed back to Seoul and I went back to Mokpo. It was nice to get back to my room and bed after a week of hostels and staying in other peoples' homes.

January 5th, 2013: I bummed around. That's about most of it. There were only a few Mokpo people around and they were busy so I just hung out with my host family, which consisted of laying around, watching TV, watching movies on my laptop, etc. I definitely felt like I was on vacation.

January 6th, 2013: After lunch with my host family, I went to Gwangju to meet up with Jaeyon. I had to take a bus out of downtown to meet her closer to her homestay in Suwon. We walked around Lotte outlets and saw the movie, Life of Pi. It was a pretty decent movie--very philosophical and thought-provoking. Liam was going to join us for dinner since he had soccer camp until 4pm. We met him at U-Square and went to TGIF's for dinner. Yes, I realize it's very foreigner of us. Afterwards, Jaeyon had to go home to bake cookies for her winter camp the next day. Liam and I went back to Mokpo and grabbed a drink before heading home. It was nice to just kick back and chat.

January 7th-9th (today), 2013: So the original plan was to meet up with Kathy on Monday and go snowboarding and hang out until Wednesday. I tried to reach her on Sunday night but she wasn't responding so I figured something might be wrong. She Kakaoed me on Monday morning saying she had gotten sick and had to go to the hospital. So my plans fell through on that. I ended up hanging out around my homestay. I've pretty much been the definition of a bum. I stay in my PJs a lot of the day and watch movies. I feel like it's not that bad though since it is vacation and I'm allowed to do this for a few days. It's not like this is going to be the rest of my vacation so I might as well make the most of it. I've met up with a few Mokpo kids and even gone to piano academy.

Tomorrow I'm heading to Seoul in the morning to make it to lunch with Tracey and her mom (who's visiting Korea for 10 days) and to a dentist appointment. Afterwards, I'm heading up to Hwacheon with a few other ETAs to go to the Hwacheon Ice Festival and visit Maggie. Then I'm gonna go back to Seoul on Saturday for a basketball game and a night of raging for Jonathan's birthday. On Sunday, I'm gonna go to Cheongju to stay with Anna for the night before we go snowboarding on Monday and Tuesday. Next Wednesday, I'll be in Busan and helping in Ben's Busan University's English class. Then I'll head off to Gyeongju for a temple stay in Golgulsa (it's a martial arts Buddhist temple, holler). Then I'll be back in Mokpo on the 18th to make it to the nurse's wedding on the 19th. It's gonna be a busy week and a half starting tomorrow. I'm excited. I'm sure I'll have a lot to blog about next time around.

Other random things: people keep getting engaged. Serena got engaged to Cole. It happened the day before Christmas, I think. I talked to her about it yesterday on webcam and she seems happy so I'm happy for her.
Posted by Ammy at 9:51 PM