Friday was really cute as we had some family bonding. After dinner, we all went to the boardwalk/Peace Plaza and watched the Dolphin Light Show together. They show it a few times every night and it's a light/water show with music. It's one of the few things Mokpo has but it's beautiful. When we got back, I baked cookies with the older host sister, 지은 last night. We didn't have any measuring cups and the whole unit conversion thing was throwing me off so they weren't as thick as normal cookie dough; they came out a bit flatter and are super breakable. Regardless, they taste good.

I've been getting more used to teaching now. It's tiring but it's definitely interesting. The kids in each change the dynamics of each day. I also joined a gym with Tracey, which I have been dying for. I'm so used to working out on a daily basis that taking a break for a week was starting to get to me. The first day I worked out, I realized how much pent-up energy I was storing since my body was used to exerting that much on a regular basis.

Saturday was a pretty fun day. The morning was a bit strange though; I woke up a little later than usual and I found my host mom sitting on the couch, not doing anything. The TV was off, and she was literally just sitting there with a cup in her hand. I believe she was just thinking and worrying, aka being a mother. I asked her if she was okay and she said she was so I asked her if she was sad that her daughters were going back to college. I believe I hit the nail on the head. I sat there with her for a few minutes but I think she just wanted to sit alone with her thoughts so I told her I was going back to bed since no one else was awake yet. When I got back up around 11am, my mom, dad, and younger sister 유진 were gone. My mom had left to hang out with my host aunt, my dad had gone to work, and my sister already left for Gwangju to move in some stuff but she would be back in the evening. My other sister 지은 made 동준 and me brunch and then my host dad came back home. Around 2pm, 지은 left for college too. I asked my dad and 동준 their plans for the day and the former was hanging out at home and the latter was going to school later. I knew some of the Naju crew was coming into Mokpo for the day so I met up with them and some of the Mokpo people. That was a lot of fun. Tracey, Robyn, Liam, Lizzie, Annie, Hana, Courtney, and I went to a coffee shop and then walked down Rose Street, where the shops are. We decided to eat at a hotdog place on Rose Street. I was inside about to order when I glanced outside and saw Tracey and Hana talking to another foreigner. Her name is Dakota and she's working at a hagwon in Mokpo. I know very little about her except for the fact that she arrived last Friday, knows no one in the area, knows no Korean, and was wandering around when she saw us and recognized that we were speaking English. She's nice enough but it was hard to engage her a lot of the conversation since she cannot really relate to a lot of stuff we were saying about our schools, our homestays, other ETAs, etc. We took Hana and Courtney back to Peace Plaza and the boardwalk so they could watch the Dolphin Light Show. 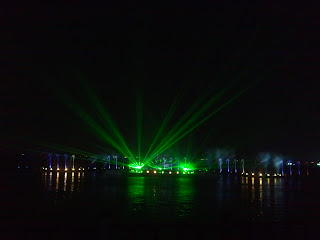 About halfway through the lightshow, Tracey's host parents show up since they were in the area. They are super funny. The dad is such a BA. They took us to a coffee shop afterwards and bought us all drinks. It was adorable. Her dad is actually a part of the CIA-equivalent in Korea which is so legit. Anyway, he was sitting next to Liam and Liam was sitting back so his shirt was pulled a bit tighter against his torso so Tracey's host dad starts feeling Liam's abs. It was HYSTERICAL. He wanted to punch them; I was dying.

It's been a good week. It's so nice to see so many friends and I'm hoping to make this a regular habit. As a side note, there's a LOT of foreigners in Mokpo. Apparently there's a huge ex-pat community here which surprised me at first. I wasn't sure how true that was but I've seen tons of foreigners everywhere--on streets walking, at the boardwalk, etc.
Posted by Ammy at 8:56 AM